Save
The Second Studio Podcast: Interview with Phyllis Lambert
Share
Or
Copy

This week David and Marina are joined by Phyllis Lambert, an architect, the Planning Director of the Seagram Headquarters, and the Founding Director Emeritus of the Canadian Centre for Architecture in Montréal. 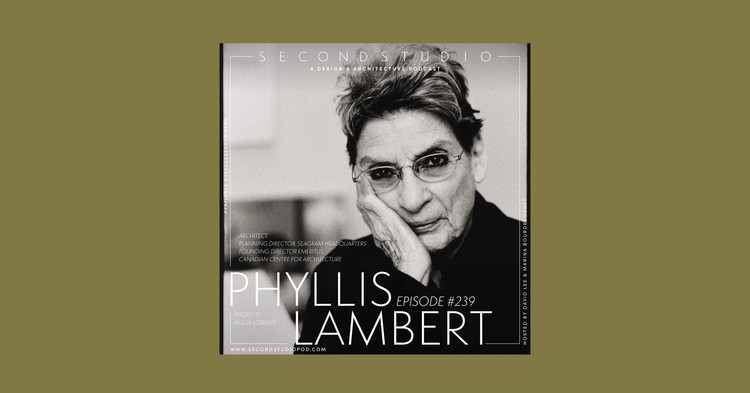 Phyllis shares the story behind the famous Seagram Building designed by Mies Van Der Rohe, her motivation for selecting Mies as the architect, why architecture should be for the public, how the public process of architecture can be improved, her views on current high-rises, and much more.

Phyllis shares how she became interested in sculpture at a young age, the expectations of her as a girl, prejudices in Montreal, and living in France. (00:00)

Because of the very conservative background I came from in Montreal, there was no intellectual environment and there was no sense of being a professional at all or working. It took me quite a while to say, “I don’t have to do that. I can come out of that.” I also do remember that I thought that as a woman that I would be the power behind the throne so to speak, and help direct things. I wanted a strong man to protect me against my father, but since I realized that wasn’t going to work, I just took over myself. (21:22)

Phyllis discusses the beginning of the Seagram Headquarters project, turning down the first architect (Charles Luckman), taking on the role of Planning Director for the project, and finding the right architect.(21:14)

I had met Charles Luckman (before Seagram Headquarters) when I first went to Europe with my parents. I remember on the deck of the boat this man who was kind of making eyes at me and his name was Charles Luckman. I thought he was pretty creepy. So I knew he was awful and the building (Seagram Headquarters design)… I just don’t even want to say it, it makes me sick to think of it and it would’ve happened. (26:09)

I asked architects, “What do think an office building in New York should be? Who do you think should be doing it?” And everybody talked in terms of Mies, “I would do this differently from Mies and that differently from Mies.” But it was always about Mies. […] When I asked Mies about Le Corbusier he said, “Of course you should. He’s a wonderful artist.” He was so generous. […] Then Mies came to see my father at the St. Regis apartment we had and they just immediately respected each other. (39:44)

Phyllis discusses why she stayed on the project after selecting the architect, the role she played in the process, the challenges of the project, and working with Mies Van Der Rohe.(43:52)

I realized that if the person who really cared about this didn’t stay on, Mies would never get that building done. Kahn and Jacobs were the Associate Architects and Kahn at one point, when Mies had done the model, had said, “Well, this building is ridiculous. With this chunk out of it. It should be a nice four-by-five building.” And so I went down his office and went ‘Bang!’ on this desk and I said, “You were not asked to design the building!” Then there was a big huge conference setup [afterward]. […] I was there trying to make sure that the Mies could do the building he wanted to do without all this interruption. (43:55)

Phyllis talks about what she did after the Seagram project: Studying at Yale for architecture before attending the Illinois Institute of Technology for architecture, and running her own practice for a time.(01:09:50)

Phyllis discusses starting the Canadian Centre for Architecture, why architecture is misunderstood, and educating the public about architecture.(01:28:00)

Phyllis shares her thoughts on some of the new New York City supertall towers.(01:34:50)

I think it’s all about money. It’s a disgrace. It caters to the people who have much too much money and New York is a place… I mean people can’t live there anymore. It’s socially despicable. These architects are not architects. Those are hired hands. (01:37:13)

Phyllis discusses the idea of ‘democratization of city governance’ in architecture and urban design.(01:40:50)

Why should a couple of people [city officials] who are not trained and do not think all their lives about what should happen in a society, in a city… why should they then have the possibility to make all these regulations and laws and [giving] permission to build? (01:41:35)

Phyllis shares what was being born in 1927 and seeing the evolution of architecture and design and her favorite building and space.(01:49:21)