Save
Outside the Box Office Design: Discover Istanbul’s New Workplaces
Share
Or
Copy

Office buildings are known for being utilitarian, efficient, and rigid. While this typology has earned a reputation for adopting rectilinear grids and open layouts, modern designs have begun exploring new alternatives for the contemporary workplace. Moving beyond standard work rooms, meeting spaces, and support zones, these projects are reimagining the relationships between envelope and program. This is a larger movement towards rethinking the formal and spatial characteristics of where we work. While this trend is being explored globally, cities have begun embracing new office designs at a larger scale. 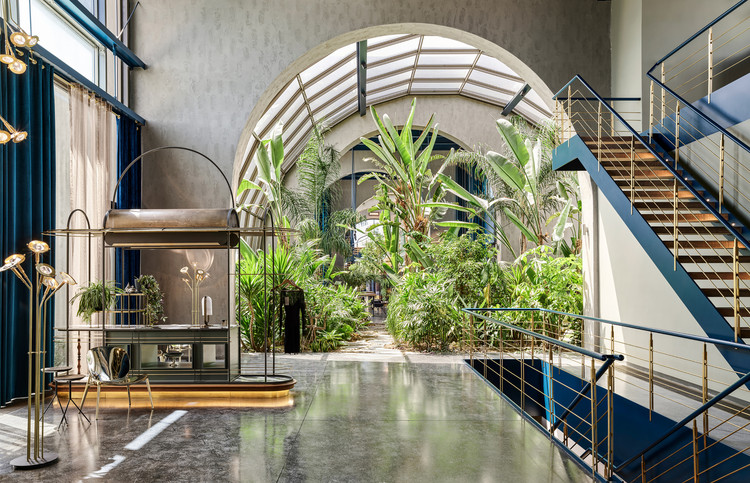 Istanbul stands as one of the world’s largest cities, a transcontinental epicenter that combines diverse culture and rich history. Located along the Bosphorus strait between the Black Sea and the Sea of Marmara, Istanbul has one of the fastest growing metropolitan economies in the world. This burgeoning economy has drove the city’s architecture and office culture to new heights, demanding novel approaches throughout the city. Whether created for fashion, media, or research, new office buildings have been designed to incorporate sustainable practices, distinct forms, and inspiring interiors. The following designs examine Istanbul’s contemporary offices. Going beyond the strictly orthogonal and pragmatic, the projects combine compelling envelopes, sculpted spaces, and careful attention to how light can be controlled through surface and void.

With 110 meters, the AND tower rises out of the new Kozyatağı financial district located in the south of the Asian part of Istanbul. The completion of this third financial center and further completions demonstrate the growth of the Megacity of Istanbul. Buğrahan Şirin, head of the office and project leader explained that the, "urban context of the new building, sitting upon a plinth containing three floors of retail space, helps to create the link between the emerging financial district and the adjacent residential areas."

Located between major highways of Istanbul, D-100 and TEM, in the proximity of Sabiha Gökçen Airport in Pendik, Istanbul, the project transforms an old industrial chemical factory land into a technology company campus for one of the most dynamic Turkish banks. The design was inspired by the natural topography around the site and the desire of creating a clear contrast to the surroundings’ unorganized urban fabric.

This parent-child building duo is located in the Kozyatağı district of Istanbul. The tall wavy glass walls provide a playful contrast to its shorter aluminum enveloped counterpart. In order to preserve the southward looking façade from the sun, the design incorporates randomized tan colored sun blockers made from perforated aluminum sheets. The back façade is made of light grey pre-cast stone which provides a contrasting but balanced look against its neighboring façades.

The site is located at the Asian side of Istanbul, between two parallel roads, one being the highway to Istanbul’s second international airport Sabiha Gökçen. The main construction consists of 2 separate blocks with 7 and 9 floors, respective to the site topography. Besides the office and residential floors, the anchor of the building is Pegasus Airlines. Above the Pegasus’ office, which has a direct entrance at the street level, there are office floors of the ESAS.

Located in Altunizade region of İstanbul, İyziPark is an office complex designed by Ahmet Alataş Workshop (AAW) and covers an area of 8.000 square meters. The main purpose behind the concept is the creation of a comfortable work environment and green campus to stimulate creativity and enhance productivity. The positioning of the buildings on the plot, dispersion of the functional program, and transparency of the structures turn the garden to a dynamic circulation and outdoor area that enables the user to perceive motion and activity in the complex.

The Bosphorus is one of the world’s most distinguished places with its unique landscape. The sea is there, exquisitely placid, the fertile land has suffused the valley in every shade of green. Its shores, which in the past were used as summer retreats, preserve this character and atmosphere to a large degree. The office building is on the Anatolian side of the Bosphorus; not right on the shore but a little further inland, along the Göksu creek.

The project has designed as the headquarter of a well-established lace manufacturer company. The major functions of the building are; a showroom where production samples of the company are exhibited, personal offices of the partners, open-plan office and meeting areas, dining hall for company employees. Zemberek Design team has been involved in the project in an early stage while rough construction of basement floors was in process.