Save
Is Mass Timber a Good Choice for Seismic Zones?
Share
Or
Copy

For some, it may be terrifying to think that we inhabit a sphere orbiting the Sun, whose core has temperatures of up to 6,000°C and all human activities are located on the Earth's crust, the smallest layer in thickness, in the so-called tectonic plates. These plates float on the mantle, more precisely in the asthenosphere, and sometimes collide, causing earthquakes. As we can see in this interactive map, earthquakes are much more frequent than we imagine, with dozens occurring daily around the world, many of them unnoticed. But some are extremely potent, and when they occur near urban areas, they are one of the most destructive forces on Earth, causing death and damage to the built environment.

With the advancement of research, tests and experiments in engineering, countries and regions with tectonic activities already have the knowledge to reduce the danger of death and damage caused by these events. Some solutions and materials work better in the event of an earthquake. Wood is one of them.

An earthquake emits shock waves at short, rapid intervals, like an extremely severe horizontal charge. Buildings generally support vertical loads well (both dead loads such as the weight of the structural materials, and live loads such as building occupants, furniture and other equipment). In the case of an earthquake, the lateral forces transmitted by the waves of the earthquake make the entire structure vibrate, which can cause anything from superficial damage to the total collapse of the structure.

In regions where there is seismic activity, flexible foundation systems, counterweights and even pendulums are used in tall buildings to avoid or counterbalance the structure as it sways. But in addition to structural reinforcements, the materials that make up the building can play a key role. Wood as a structural material works particularly well in the case of earthquakes, as wood lateral force resisting systems tend to have high degrees of ductility. This means that it is a material that supports a great deal of deformation until the moment of its fracture. That is, it bends before breaking. Just think about the behavior of a tree in a windstorm. This is possible because wood is composed of long, thin, strong cells and the elongated shape of the cell walls gives the wood its high strength parallel to the grain. Wood products can withstand very high loads, particularly when compression and tension forces are exerted parallel to the wood fibers.

Another positive trait of wood in these situations is that it is a lightweight material. The less mass the building has, the less inertial force will be created with seismic waves. Cristiano Loss, Assistant Professor of Wood Engineering at The University of British Columbia, specializes in the resilience of high-performance wood-based systems and structures against earthquakes. Involved in experimental testing of wood assemblies, he points out the inherent benefits of such systems. “One of the things that makes wood stronger by far is its lighter weight. You might think this is a downside, but it's actually a big advantage,” he explains. "Wood is five times lighter than concrete, considerably reducing the seismic forces in a building."

In short, a building that behaves well in an earthquake is one that balances stiffness and lightness. A building that is too rigid becomes fragile as its structure will eventually break with the vibrations, while a lighter, less rigid building can cause occupants to shake more and create large movements that damage building components. Several investigations, with real tests, have shown that buildings made of mass timber, with metal connectors, present a performance that is very adequate to these natural phenomena. Cristiano Loss points out another advantage of wood systems: their tendency to be an exposed system of connections. “The fact that you don't have any rebar incorporated into the material or system can detect damage quite easily. As long as you have the connection well defined in the system, timely repair is possible.”

In places where seismic events are common, finding safe places to shelter the population in the event of a strong earthquake is vital to enable assistance during a delicate moment and to allow the rebuilding of infrastructure and what was destroyed. A post-disaster building or hub is defined as an essential facility for providing services in the event of a disaster. This means that a facility of this type will be built for a considerably higher seismic design load than typical residential or commercial buildings. This includes power centers, supporting infrastructure and hydropower operations centers. Wood has been identified as an ideal material for the construction of this type of building, due to its resistance to seismic forces and its durability in the face of wind and even fire.

Engineer Nick Bevilacqua, Principal at Fast+Epp, says that schools in British Columbia, Canada, are designed to a High Importance category, meaning that the structures are designed to withstand 30% higher seismic demands than ordinary buildings in an earthquake. In addition to protecting students, they are designed to be convenient community centers that provide safety, shelter and access to services after an earthquake or other types of disasters. In terms of structural innovations, he points out that “For the seismic design of Bayview Elementary School and Sir Matthew Begbie Elementary School we used a CLT shear wall system—a mass timber structural assembly that offers a certain ductility level that the seismic system has to be able to meet. Ductility is essentially the amount of flex and give that a structure can offer without failing." These are structural walls connected to the foundation by steel support rods at the corners, which allow the entire united structure to move and dissipate energy in the event of an earthquake, without collapsing.

Developing solutions that reduce the risks and damage to buildings in an earthquake has motivated many researchers around the world. It has been observed that timber buildings remain light, have adequate rigidity and the use of hybrid systems that can include steel contribute to absorb and dissipate part of the earthquake's energy. Ultimately, earthquakes show the full force of nature, and how fragile we are to it. Mass timber can be a highly resilient building system, in addition to being a highly sustainable construction method, allowing for reuse after the end of its useful life, and is safe from fire and even in seismic zones. 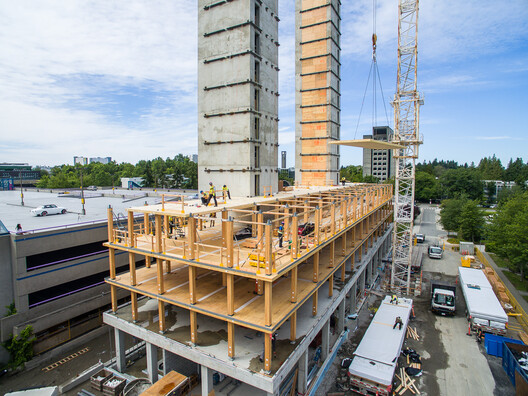