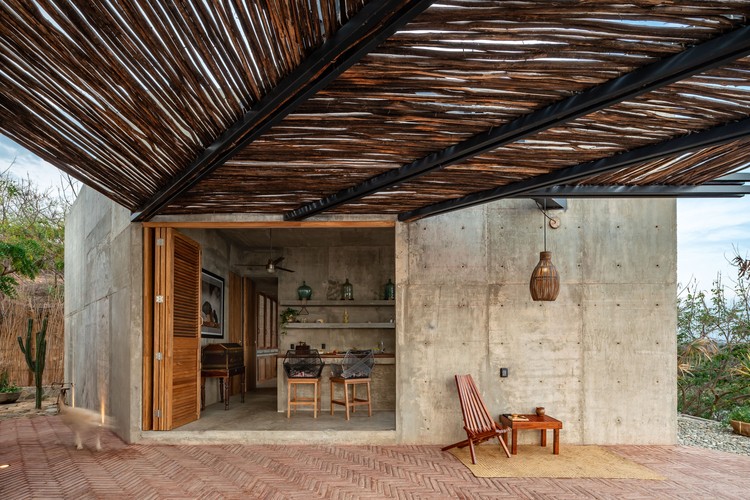 Text description provided by the architects. Two years two months and two days, the writer Henry David Thoreau lived in a cabin which he built himself in Walden Pond, Massachusetts, his childhood town. In just about a space of 3 m x 4.5 meters lakeside, he developed himself as an individual isolated from society looking for inspiration of the natural and its origins. His time at the cabin, let him valued what it’s really necessary and the respect of life itself which leads him to renovate himself as a human and fight on social subjects at the end of his life. This means it's funny how the toad is different when it enters than when it leaves the pond.

La casa del Sapo started to satisfy a program of needs through an architectural posture that reflects in the context, community, and in results of actions we are passing to our future generations. It’s a project that’s grown tremendously even years before it was even thought of being built, A project that landed through signs and intuitions, which little by little opened doors and built bridges between people that ought to be united.

La casa del Sapo is everyone’s house, it has become a gathering, Sapo is union, a family home, a shelter, an inclusive space, a safe space, a rest home, a school, a place where children can learn how to swim, where they can send turtles into the ocean, an orchard, a place to eat and drink mezcal, a place for friends, a place to grow, Pau and Mario’s home... When you get to show the kind of respect that a place deserves, from that very moment of telling the community what are you going to do, it embraces you, which has to be reciprocal.

The house was designed by the place itself, “two stones looking at the sea, craving for its timelessness”, the first one looks for the sunrise and the other one for the sun to go down, where the spacing between them shows the sea, the beauty of the costa Oaxaqueña, and creates flexible space for the one living in it, who will adopt it in its own personal way of being.

The materials were chosen for the people and their own skills for construction, just as they were thought out to be ecological and socially friendly. In the building process, some things were left entirely to the decision of the workers as a result of the pandemic that we all had to go through., where everyone came through on their own wisdom and willingness during every single step in the process. This is a project where the number of people involved is surprising, some of them, highly remember with appreciation because of one virus.

La casa del Sapo is a project that gives and transforms, it makes you look around and gives you the will to provide and be part of its community. Zapotengo is a paradise that sticks with you, it locates in your memory and never leaves, it’s just another rock in the pond, like Zumthor says It’s a project like many others will come because now, people truly look around.