Save
Is It Possible to Mix Local Materials and 3D Printing?
Share
Or
Copy

The art of building a shelter made from blocks of ice is passed on from father to son among the Inuit, native peoples who inhabit the northernmost regions of the planet. The circular plan, the entrance tunnel, the air outlet and the ice blocks form a structure where the heat generated inside melts a superficial layer of snow and seals the gaps, improving the thermal insulation of ice. In a storm, an igloo can be the difference between life and death and perhaps this is the most iconic and radical example of what it means to build with local materials, few tools and lots of knowledge. In this case, ice is all you have.

Taking advantage of abundant resources and local labor are key concepts for sustainable architecture, which are often overlooked at the expense of solutions replicated from other contexts. With new demands and technologies, the globalization of building materials and construction techniques, is there still room for local materials? More specifically in relation to 3D printed constructions, are we destined to erect them only in concrete?

When we searched for 3D printing on the Internet, we quickly came up with two main sets of results. The first is in relation to the boom of 3D-printed buildings in concrete, the most used building material in the world, but which is also responsible for high carbon emission rates. The second group concerns experimental and innovative construction projects on other planets.

On the surface of Mars, which is more inhospitable than the North Pole, the idea of only using what is available locally makes the most sense. If the urge to colonize the planet continues to gain strength, supplying spaceships with construction materials (sacks of cement, gravel or plywood sheets) is, without a doubt, out of the question. The Marsha prototype, developed by Ai SpaceFactory, was the winning proposal in the “NASA Centennial Challenge” contest. Like the vast majority of current proposals, Marsha uses 3D printing techniques using a mixture of basalt fiber extracted from Martian rocks and renewable bioplastic (polylactic acid or PLA) processed from plants that could be grown on Mars. The recyclable polymer composite outperformed concrete in NASA's strength, durability and crushing tests.

There is also research for shelters on the surface of the Moon, also printed in 3D with "lunar concrete". The main ingredient in the mixture would be a powdery soil found all over the surface of the Moon, known as lunar regolith. To bind and create the concrete, it was noted that the astronauts' own urine could be used. “The researchers found that adding urea to the lunar geopolymer mix, a construction material similar to concrete, worked better than other common plasticizers like naphthalene or polycarboxylate to reduce the need for water. The mixture coming out of a 3D printer proved to be stronger and maintained good workability.”

But back to Planet Earth - 3D printing of buildings has been identified as a method that can potentially optimize projects, create organic shapes, reduce material consumption, construction time, necessary labor, logistical demands, and future costs. Several interesting examples have emerged, but most rely on concrete for construction. In other words, even though 3D printing can be decentralized, the raw material used for construction can rarely be obtained locally.

A paper developed by several researchers at the University of Texas, which evaluates the possibilities of materials for 3D printing of buildings, highlights the concern with focusing on concrete and its environmental impact. “Additive manufacturing methods are poised to substantially transform the industry, enhancing automation, enabling savings in materials use and allowing for an unprecedented fusion of form and function; however, relying on concrete as the extrusive material of choice has the potential to enormously exacerbate growing environmental challenges.”

The researchers point out that considerable attention has been paid to the search for more environmentally sustainable alternatives to concrete, especially soil itself, which can be harvested and planted without the need to transport materials over long distances, allowing for a considerably reduced carbon footprint and built-in energy costs.

There are already some initiatives in this direction. A collaboration between the team of Mario Cucinella Architects (MC A) and WASP, specialists in 3D printing in Italy, resulted in the first 3D printed construction of an all-natural, recyclable, carbon-neutral material: raw earth. The circular prototype is called TECLA (a combination of the words Technology and Clay) and was built in Massa Lombarda (Ravenna, Italy) using several synchronized 3D printers working at the same time. It is a circular house created with fully reusable and recyclable materials taken from the local land.

The Urban Dunes project in Abu Dhabi creates organic structures, like “urban oases”, from a thick layer of sand, mixing active passive and low-tech systems to maximize thermal comfort. The vaults are composed of stereotomic blocks made of 3D printed sandstone, using local sand as the primary material. The solidification of desert sand is carried out using binder jetting technology and it is expected that the three-dimensionally printed vaults, with a thickness of 55 cm, will prevent the urban space from overheating in the middle of the desert.

When thinking of large cities, we also need to consider that there is a huge stock of solid waste produced daily and construction debris. A team from the Polytechnic University of Valencia (UPV) developed an alternative to reinforced concrete beams, creating beams from recycled plastic using additive manufacturing. The result is a drastic reduction in weight (80% less), which facilitates transport and reduces the energy required for its assembly, maintaining structural rigidity.

There are many possibilities to include other materials for additive manufacturing - raw earth, sand, agricultural waste, plastics and other waste. The uses, in turn, range from complete buildings and pavilions, to helping regenerate ecosystems, and limb prosthetics and printed organs.

Like ice for the Eskimos, local materials are often better adapted to climatic conditions and therefore lessen the negative impact of construction. Furthermore, they can allow for a better after-life for the construction, whether for recycling or its degradation into the land itself. The innovation around 3D printing for construction will build new paths to architecture when it can finally incorporate local materials, knowledge and demands for the general public. 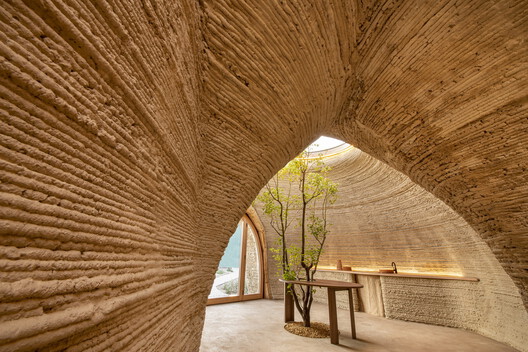