Designer and art director Serena Confalonieri, along with a team of students and volunteers have created “Quadra”, a graphic installation that is part of the initiative “Piazze Aperte” promoted by the Municipality of Milan. The urban intervention is a graphic art project in a former parking lot in the Quarto Oggiaro district that aims to enhance and characterize tactical urban interventions in all cities. 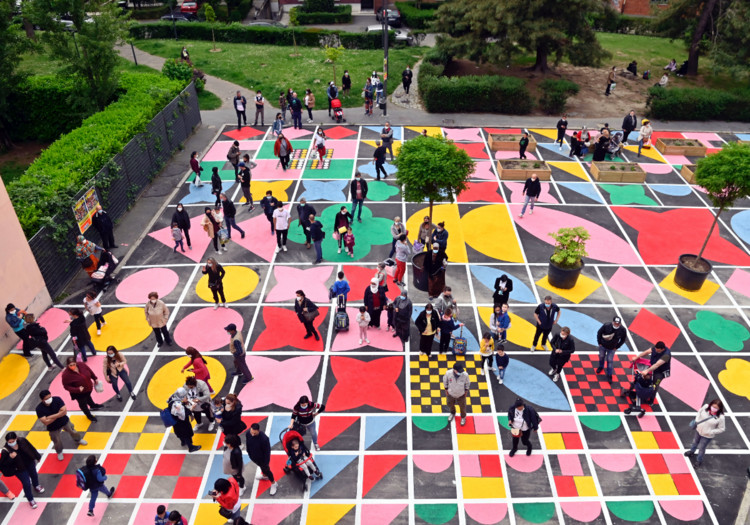 The aim of the intervention was to create a recreational space that could visually enhance the existing plots and encourage the neighbors gather and socialize in outdoor public areas. The intervention was applied to a 600 sqm plot, and included a graphic subdivision of a grid that resembles the sheets of squared notebooks. This grid squares were then filled with primary colors and simple geometric forms, referencing at the drawings that children draw on the pages of their school notebooks. In addition to the shapes and color blocks, green areas and vegetable gardens, along with floor games such as twister and chess, were also added to the intervention, making it an interactive and recreational space for kids and adults.

It was very stimulating to have the opportunity to work on a project on such a large scale, which fits into a strongly characterized urban and social fabric. We designed this graphic intervention considering all of the functional and aesthetic needs, but also, and above all, the needs and the external stimuli that children require in order to play and interact. With Quadra we wanted to work side by side with the students and their parents, not only during the design phase, but also during the realization, in order to involve them directly and give them a sense of direct belonging to this new colorful urban space. -- Serena Confalonieri

The project was completed in May 2021 and was created in collaboration with the volunteers of the Milanese association WAU! and students of I.C.S. “Via Val Lagarina”.

As the fight against coronavirus keeps on bringing many cities around the world to a standstill, the need to support urban entities and local governments is greater than ever. The Un-Habitat or the United Nations agency for human settlements and sustainable urban development, whose primary focus is to deal with the challenges of rapid urbanization, has been developing innovative approaches in the urban design field, centered on the active participation of the community.