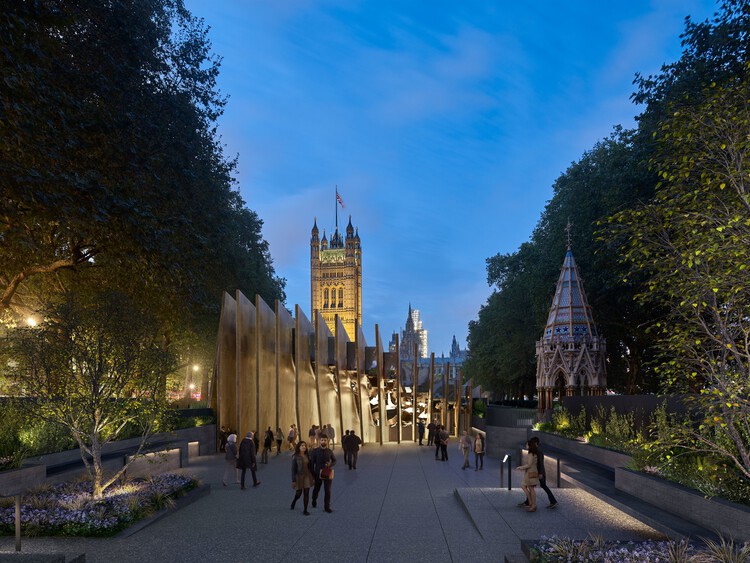 UK’s first national Holocaust memorial will honour the 6 million Jewish people who have fallen victim to the Nazi regime while also commemorating the persecution of Roma, gay and disabled people. The Learning Centre will teach visitors of other subsequent genocides in Cambodia, Rwanda, Bosnia and Darfur. Designed by Ron Arad Architects, the memorial features a series of bronze walls that define 22 paths, one for each country in which Jewish communities were persecuted, which lead visitors to a space of contemplation.

The chosen site raised serious concerns regarding the project’s impact on the park, the adjacent heritage sites or the damage it would cause to existing trees. The design has received objections from Historic England, the UK branch of ICOMOS and Royal Parks. Announcing the planning approval, The Ministry of Housing Communities and Local Government declared that “the location next to the Palace of Westminster would offer a powerful associative message in itself, which is consistent with that of the memorial of its immediate and wider context”.

The project was the result of an international competition, and the revised designs were developed after extensive consultation with local residents, Holocaust experts and survivors. The amended proposal retains the vast majority of Victoria Gardens’green space, allows for better views over Parliament and improves the area along Thames’ embankment through a new boardwalk. Construction is set to begin later this year and will be completed by autumn 2024. The UK government plans on ensuring a free entrance to the site.