Save
Brain Drain or Brain Gain? How Architecture Has Become a Tool for Migration
Share
Or
Copy

Migration across towns, cities, states, countries, and continents is part of everyday life. As we move to seek out new opportunities in our personal and professional lives, our individual choices actually have greater impacts on the large, highly-interconnected socio-economical systems around the globe. Moving from a small farm town into a major metropolis, or from one continent to another comes with more implications than you may think- and architecture, paired with the concept of “Brain Drain”, might be helping to pull the strings behind the scenes, influencing you to go from one place to the next.

Brain Drain is a phenomenon that occurs when educated, professional workers leave a place in order to move elsewhere to benefit from better pay, working conditions, lifestyle, and occasionally, work-life balance. This traditionally occurs with a significant economic cost to the places that people are moving from. As an example, many students choose to study architecture internationally which greatly benefits the places that they go to, but when they stay to work, it amounts to a level of talent that their home city has lost and their city of employment has gained. Brain Drain is most noticeably experienced as highly-educated adults tend to move away from rural areas to places with more densely concentrated urban centers. The scale as to which this happens and to what particular regions shift over time, but many smaller towns around the world are starting to take action to retain their residents. They’re doing this by using architecture and a reinvention of the built environment as a reason for people to stay.

If you’re from a small town or have ever visited one, you may have wondered, “What do people here do for fun?” That question, along with many others, is part of the big reason why small towns feel like they are losing out to big cities. In the British port town of Folkestone, Brain Drain has become a big issue as many of its younger residents move to cities after earning advanced degrees. Planners and designers are working to solve this issue by regenerating the town’s seafront to host festivals and develop new projects that will focus on increasing engagement with the younger generation. One idea that was proposed for this new site includes the world’s first multi-story skate park, complete with different levels dedicated to urban sports, an 11-meter-high climbing wall, and lounge areas with food and drink offerings.

Would You Live Here? Exploring What Makes A City Desirable

The idea is that if this skate park and other places in Folkestone can make childhood more meaningful and full of impactful memories, then its residents are more likely to invest in their town, its future, and maybe even raise their own families there. In the United States, where migration away from rural areas has increased over the last few decades, even some major cities are beginning to feel like they can’t compete when it comes to attracting and retaining highly-educated individuals. Chicago is looking to solve its Brain Drain crisis by investing in a state-wide research network that will create new jobs, and multiple new state-of-the-art facilities- renders for which have already been publicly revealed as a tool to excite recent college graduates who are considering moving.

These types of spaces, designed as magnets to retain talent and mitigate the Brain Drain effect, are taking lessons from the types of buildings and masterplans being designed in parts of the world that are seeking to attract the same talent. Take, for example, Google’s new campus, located in Mountain View, California. It’s designed to be not just a workplace, but a destination with world-class amenities that are essential to daily life for its employees. The Brain Drain effect will benefit Google as much as it will cause a disadvantage to smaller towns like Folkestone, and maybe even someday Chicago. While Brain Drain isn’t something that is tangible, the built environment is, and it’s the rope that’s being pulled in the tug-of-war for talent between small towns and large cities as they each continue to find a way to appeal to younger, more educated, generations. 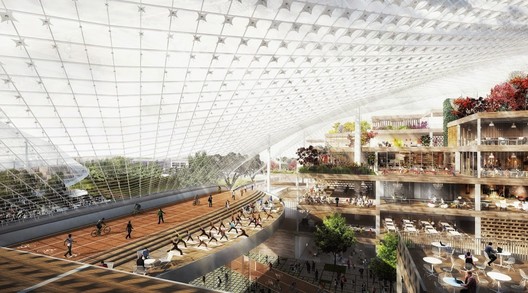