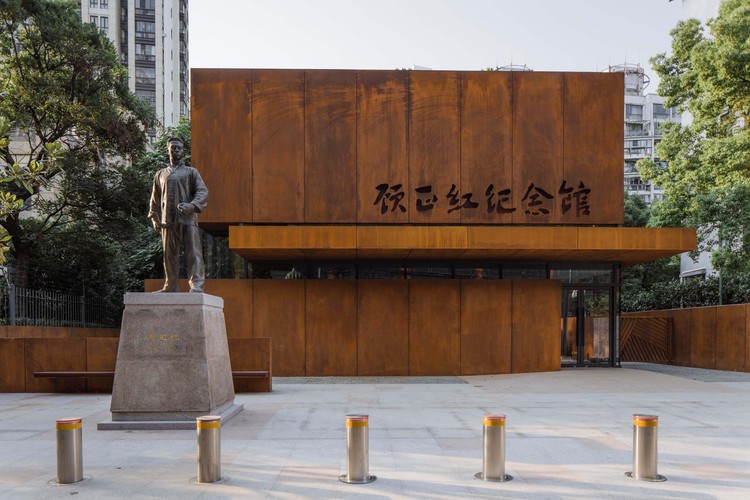 Text description provided by the architects. Around a century ago, the abrupt end of the life of a twenty-year-old young worker in a Japanese-owned cotton mill ignited the outburst of the May Thirtieth Movement. His name was Gu Zhenghong. Hundred years later, on No.300 Aomen Road, Putuo District, Shanghai, the very site where the martyr laid to rest, the expansion work of Gu Zhenghong Memorial Hall was completed right before the 100th anniversary of the founding of the Communist Party of China (CPC) to present a brand-new look in front of the public.

The original Hall and the ambient area suffered from limited space. Though the extension part is not spacious either, multiple complex reconstruction strategies were adopted to cope with the unique site condition.

Despite the extremely fine size of the site, a two-story annex was added to the south with a small square adjacent to the street, which not only adds a solemn aura to the building but also provides a necessary transitional area between the populous street and the memorial hall. Above all, the midget rectangular south square gives space to relocate the martyr’s statue, the national flag, and all the themed sculptures (outdoor exhibits of the original hall) and helps form an east-west axis of manifold ceremonial spaces for various activities.

Using landscape components to organize architectural spaces is another salient strategy. The slender pathway from the eastern side of the old hall to the site where the martyr deceased has been incorporated into the overall visiting routes. It completes the sequence of the emotional flow by connecting the square, the hall, and the martyrdom site through four actions of entering and exiting the hall, as well as walking towards and from the martyrdom site through the pathway (contrast perceptions of space narrowing and broadening). The flow strengthened by the design and connections of the architectural spaces, in coordination with the exhibition contents, enables a close conversation between the patriotic revolution theme and modern urban living.

The style of the new hall is customized by a set of interlocked cubes made from weathering steels. The retreating structure and all-around cantilevers not merely reinforce the steadfastness of the volume but also reflect the nimbleness of the composed art form. Aligned with the rust-red texture, the new hall manifests the winding road of CPC-led Chinese labor movements as well as the heroism and perseverance along the road.

The pavement of the square uses a combination of three similar stone materials of slightly different colors and textures, which enhances the ceremonial atmosphere and at the same time serves as a metaphor for the red-colored flower. On the western side of the square, a set of simple but practical recreational spaces was designed centering around a conserved magnolia tree. This is an attempt to achieve the fusion of the red theme and everyday life ---- public spaces for the public, which should also be the eternal theme of the city. 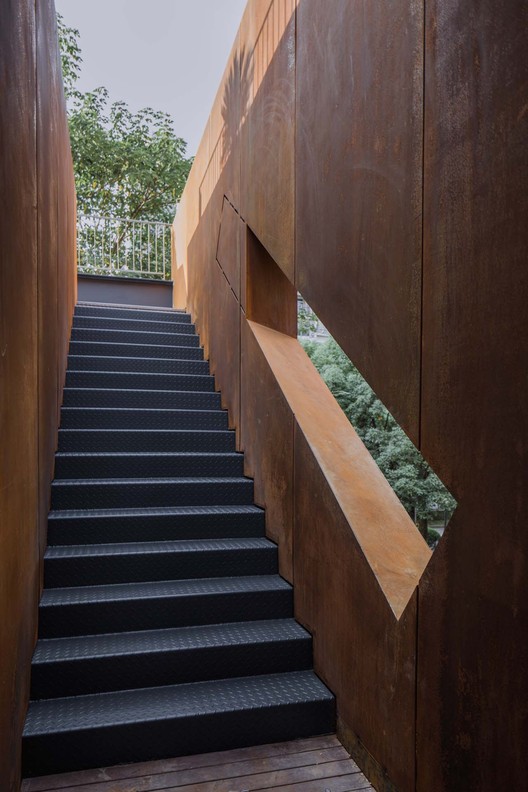 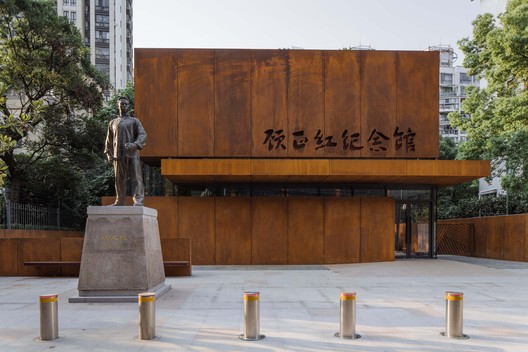