Save
Japan's Art Islands: The Work of Tadao Ando in Naoshima
Share
Or
Copy

Few places in the world have so many cultural and artistic facilities as the islands of Naoshima, Teshima, and Inujima, in Japan's Seto Inland Sea. Eighteen museums, galleries, and installations make up the Benesse Art Site Naoshima, a project idealized by billionaire businessman Soichiro Fukutake in the 1980s.

At the time, Fukutake invited none other than architect Tadao Ando to design the Benesse House Museum on the island of Naoshima, which went beyond an economic reboot to create a simpler, slower way of life - evidently for those who can afford it - far removed from the Japanese megacities.

Ando, who was born in Osaka, where he established his office, went on to work with the Benesse group on other projects, such as the Chichu Art Museum and the Lee Ufan Museum, and today the site is filled with modern art greats, such as Andy Warhol, David Hockney, Jean-Michel Basquiat, and Cy Twombly.

Other world-renowned architects were also invited to contribute with their visions. Sou Fujimoto designed the Naoshima Pavilion on the island's coastline, a lightweight mesh-like steel structure shaped like a polyhedron, and Ryue Nishizawa designed the Teshima Art Museum, an impressively fluid building embedded in the landscape offering a sensory experience as a single piece of artwork - in this museum, there is nothing but bodies and nature subtly mediated by architecture.

In a recent trip to Japan, Brazilian architecture photographer Haruo Mikami visited the Art Islands and shot some of the architectural masterpieces at the Benesse Art Site Naoshima. The following are five of Ando's projects that Mikami explored on the island of Naoshima: the Benesse House Hotel, the Benesse House Museum, the Chichu Art Museum, the Lee Ufan Museum, and the Rock Sculpture Garden. 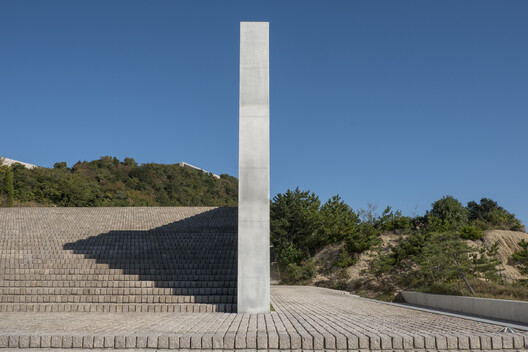