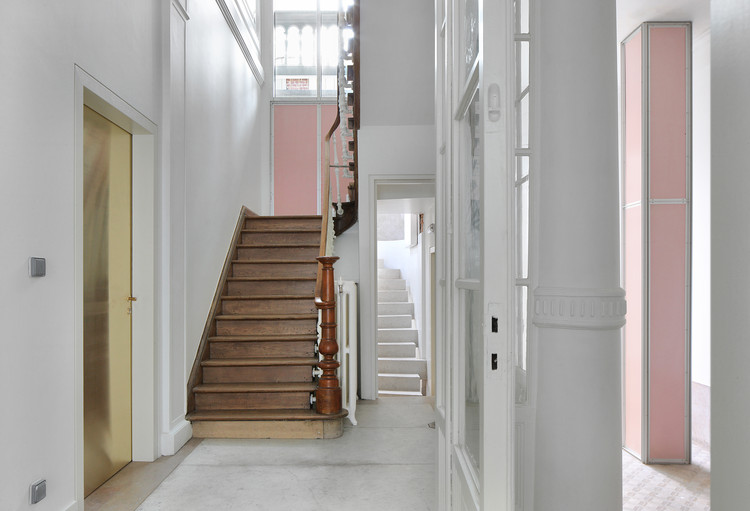 Text description provided by the architects. On Maarschalk Gerardstraat in Antwerp, Eagles of Architecture subdivided a large nineteenth-century house into studios. The façade was painted a uniform white, and the interior of the porte-cochère and its two classical columns were given the same treatment. The passage was obstructed by a third hollow column covered with pink plasterboard, the standard finishing for a pipe duct. The combination of a classical column with a pipe duct comes across as a laconic gesture comparable to Le Corbusier’s exclamation, ‘Pour Ledoux, c’était facile – pas de tubes’ (For Ledoux, it was easy – no tubes). But if the confrontation with the townhouse is in itself already a contest, then Eagles of Architecture lets its opponent have the choice of weapons.

In the mid-nineteenth century, the main task of a designer was still to cover and decorate a building. Modern architecture grew out of the resistance to the tradition of the applied arts. From now on, architects would no longer design the surface but would try to reveal a concealed essence. Initially, it was enough to strip the surface of a building of representations, but later the surface itself had to be eliminated.

Uncovered, the pure construction of reality was still not visible. Even bare walls conceal the fact that the bones are white. With that, the border between a building’s interior and exterior became an inevitable but negative theme in every subject. From now on, architects would look for how they could organize a residence without bringing about a clear border with the exterior.

The walls of the pipe duct in the house on Maarschalk Gerardstraat are pink. The plasterboards were coloured at the factory to distinguish the different types: the fireproof boards are pink, the water-resistant ones are green, and the blue ones have better acoustic qualities. Normally the boards are whitened and the difference is erased, but Eagles of Architecture finished the boards of the duct with transparent varnish and did the same with all the new walls in the building. The colours seem to allude to a world full of ornaments with houses in which not unity, but diversity is the goal.

Eagles of Architecture developed wall coverings in keeping with the eighteenth-century custom to make a distinct design for each room but contaminates it with a late-twentieth-century functional coding. The finishing reveals the role of each room within the whole: in the shared stairwells, the walls are covered along with the entire height; in the common rooms, only the lower part of the walls is covered; and the personal spaces remain unfinished.

The plasterwork has been knocked off the bricks. Because here only the visible scars of the renovation are cemented locally, each of these rooms has a unique wall signature. Pipes running across the walls disappear under a thick layer of cement and reappear above it.

Eagles of Architecture does not strive after continuity between the interior and the exterior. The façade can be a screen, with its own story. Rooms are pushed against the outer walls without having an effect on them. Yet the building is transparent. The project follows the modern conception that successive interventions in a building must stand out from one another so that the structure of the initial construction remains legible.

That in itself is not new. What is more surprising is the clarity with which it is possible to read the playing rules adhered to by the designers. In 1765, Piranesi wrote: architecture that is understandable by all will be despised by all, and architects will leave the stage under jeers if they do not hold onto their liberty to choose ornaments arbitrarily. Today, Eagles of Architecture finds that freedom precisely in the formulation of rules. 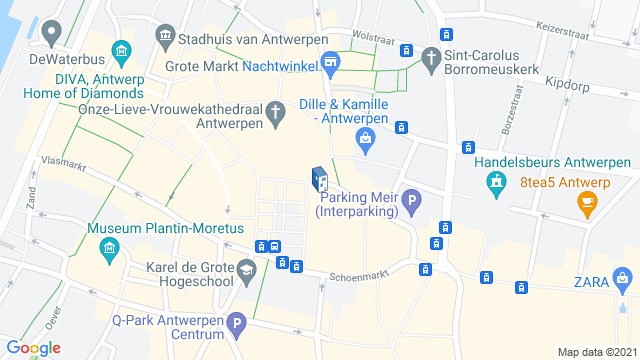 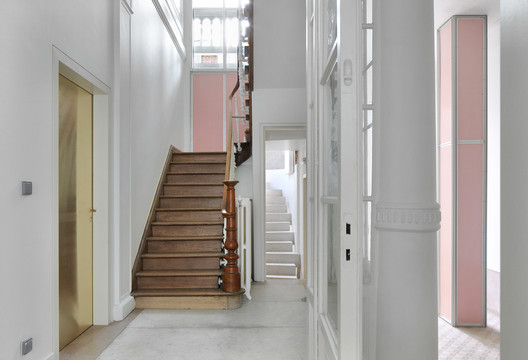