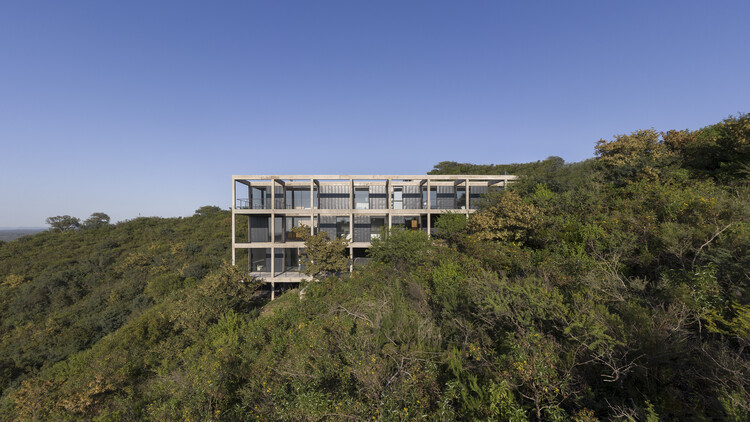 ¿How can we place a house on a steep hillside? This was the main challenge with the VG house project, where its functionality and its placement and construction were conditioned by the slope.

We had to find the best way to place a building on a 45 degrees slope, facing south, and in a long and narrow lot. The logical solution consisted of terracing the house’s different levels, but this wasn’t the right decision for a slope facing south. To take advantage of the views towards the city, the good orientation, and to free the visuals from the street, we decided to place the structure perpendicularly to the slope, as a dock that emerges from the highest level of the site and grows downwards in several levels.

The hillside on which the house is placed, it's fully covered with native vegetation. This was a landscape highlight that we wanted to preserve, for that reason, the relations between the building and the ground should be resolved most naturally, avoiding big terrain movements and letting the structure lay in the natural terrain surrounded by vegetation.

The functionality of the house and the inside-outside relations, were as well affected by the hillside placement. To avoid the feeling of disconnection between the inner spaces and the natural terrain, several terraces were placed on the different levels of the house, all of them connecting directly with the natural terrain, allowing multiple expansions and different outdoor uses.

The construction in such a steep slope presented as well several challenges. The structure of the house was conceived as a grid that served as a permanent scaffold that allowed its construction. A regular and repetitive structural grid interacts with topography and creates two different parts, one fully closed that contains the inner spaces, and another open with terraces and outdoor expansions. The rest of the constructive elements (walls and slabs) were prefabricated and placed to complete the grid. 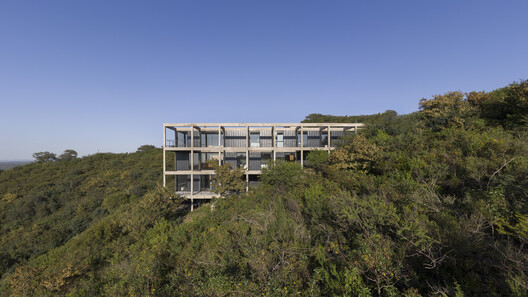