Text description provided by the architects. Casa FG is a dwelling of 420 m2 total located in private urbanization in the Province of Buenos Aires, Argentina. It’s established on a plot of approximately 1,050 m2 with views of a central lagoon. The house is articulated through a central double-height space that organizes the main path and allows the architectural space to open up, visually integrating its different areas and the environment. With a simple diagram floor, it seeks to generate different sensations through the tour. Taking as fundamental premises of the project: the orientation, the visuals, and above all the search for the limits between exterior-interior to be diffuse, internal courtyards were generated around which the spaces of the house are articulated. The project is developed on two levels with very different uses.

The first level is articulated with the service areas in front, the social areas in the center of the house, and a rear gallery that covers the entire width span of the house. In line with the services is the large central yard that merges with the double interior height providing natural light through the large windows. Also, the yard generates privacy from the street through a “green curtain” of imposing plants, allowing to lengthen the view and add cross ventilation to the living-dining room. The interrelated social areas (kitchen - dining room) open generously to the green areas of the house and are fully integrated into the gallery. The second level is dedicated to the private areas of bedrooms and family living. The circulation of this floor leads to the large central double-height, thus generating visuals and interesting spatialities of the route.

The owner’s request for a "zero maintenance," house, the idea was to use noble materials that maintain their properties over time pass. Corten steel was thought to materialize the façade of the upper level. This one covers the upper level through a combination of blind panels and parasols that allow light to enter, generating a play of lights and shadows projected inside the house. The exposed Concert plays an essential role and coexists perfectly with corten steel. Board concrete was used in the partitions and smooth formwork in perimeter beams and slabs. In the large concrete partitions, tensioners are hidden to support the gallery from the upper floor (avoiding columns that obstruct the views of the lagoon). With this project setup, clean, seamless visuals are achieved from all common areas on the first level.

The architecture studio was also in charge of the interior design project. A scarce variety of materials, textures, and a palette of neutral tones were used that are sustained in all environments to generate a common and harmonic language, using noble materials as protagonists to enhance the spaces. 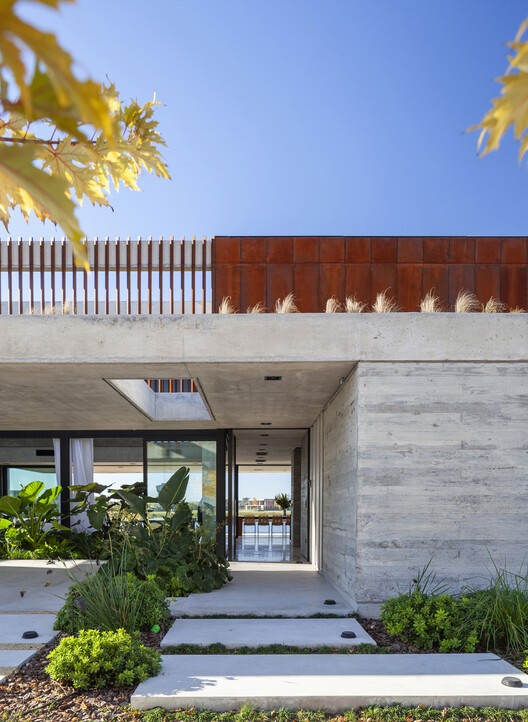