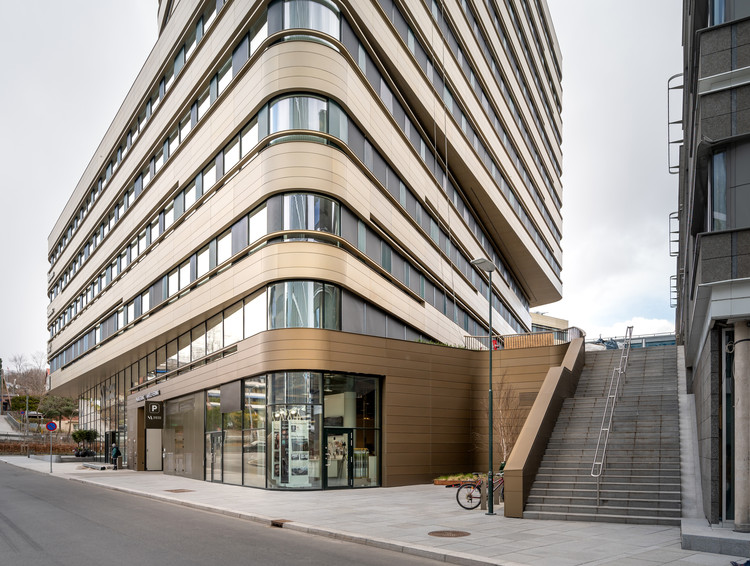 Text description provided by the architects. Skøyen Atrium III (SAIII) is the last and final addition to the office complex Skøyen Atrium, designed by Lund+Slaatto Architects (1995 and 1999). Through its form and expression, the addition seeks to interpret the existing building’s structure and architectural language. With the new extension in place, Skøyen Atrium covers more than 65,000 sqm and is one of the largest office complexes in Oslo. In addition to offices, the new extension consists of a conference center as well as a restaurant.

The first two phases of the Skøyen Atrium are known for their characteristic look with horizontal lines and curved corners. The new addition reinterprets several of these features, by continuing existing parapet heights, and the strong horizontal while at the same time distinguishing itself through material and shape. On an urban level, SAIII completes the city block and forms an enclosed central courtyard.

The structure is visually divided into volumes that are stacked and rotated in relation to one another, creating a dynamic composition. The volumes pivot around the same point to the southeast, accentuating the main point of arrival. The facades are clad in golden anodized aluminum panels. The reflective material changes the building’s appearance continuously depending on the weather and time of day. On a sunny day, it has a golden shine, while in cloudy weather they appear less saturated. The facades' materiality and high level of detailing enrich both the courtyard space as well as the adjacent urban context.

The building is organized around an internal atrium and an outdoor courtyard. The courtyard is designed as a green landscape on multiple levels connecting the new building with the existing one while providing a new outdoor meeting place. It is accessible from street level and connects the inner life of the building to the wider context. The internal atrium is a glass-covered six-story space forming the central communication hub of the building, containing the main entrance, reception and connects through to the conference hall, canteen, and restaurant. The spacious atrium has an exclusive feel to it with a palette inspired by Nordic modernism. The floors are laid with Norwegian slate, while walls and ceilings are clad in variations of ash veneer. Expanded metal mesh in a golden tone connects the interior areas with the building’s exterior.

SAIII is a BREAAM-NOR Excellent certified building with energy class A. Its green measures help reduce energy consumption. About 30 percent of the heat is provided by heat pumps on the roof and the remaining 70 by district heating. There are solar panels on the roof that covers approx. seven percent of the building's total energy needs. The building is easily accessible by public transportation due to its immediate proximity to the public transport hub at Skøyen. The building also connects to the city’s extensive network of bike paths and offers safe bicycle parking as well as service rooms both for bicycles and skis. 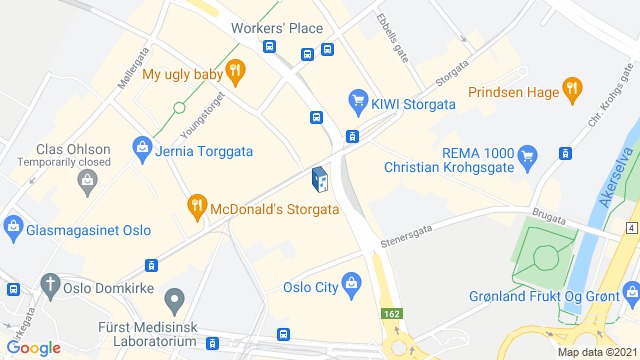 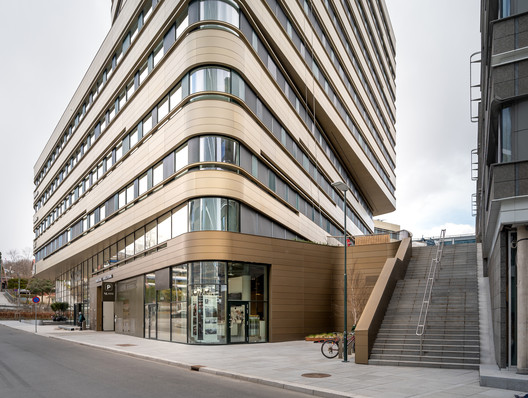