Ennead Architects have won the international competition to design a dynamic 32-floor commercial tower in the heart of Shenzhen’s high-tech Nanshan District. The architecture studio’s aim was to create a platform that “embraces creative exchange and the sharing of human experiences and ideas”, so they developed a design that offers a flexible working environment with a subtle use of color and materials, complimenting the spatial and functional needs of Chinese tech company ByteDance. The tower, which is expected to be completed by 2024, will employ co-working spaces, commercial, and recreational facilities in a dynamic-looking structure overlooking Shenzhen Bay. 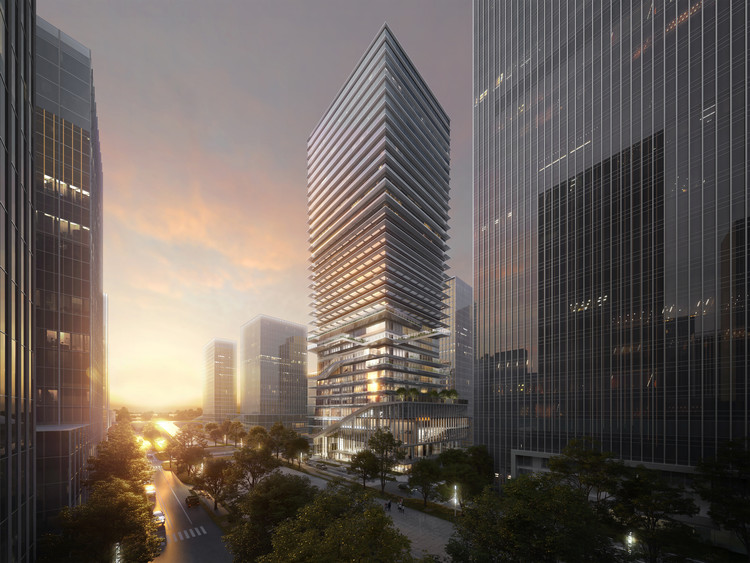 To stay true to ByteDance’s identity, the design of the ByteDance Houhai Center was inspired by the bits and bytes of computer science, and illustrated as dynamic slabs, animating the facade. The overall form of the structure was derived from subtracting different parts of a simple cubic volume, creating an array of dynamic horizontal overhangs.

The design’s modular connections were implemented in both the physical form of the architecture along with its programming. Since the slabs are slightly shifted from each other, they act as shading elements and outdoor terraces, creating an in-between space that links the outdoors with the interior. The facade’s exterior curtain wall gives the building’s users a visual connection to the city as well as diffuses daylight into the space via horizontal shades.

An optimized working environment and human wellbeing was also a priority while designing the tower. Fresh air circulation was maximized throughout the building with access to roof gardens and green terraces. In addition, the spatial program includes several types of working spaces, varying between spaces for collaborations and technological inventions, along with mixing zones that encourage gatherings and informal meetings.

Founded in 1963, the New York-based architecture firm has over 200 architects working across New York and Shanghai. The firm has worked on cultural, educational, scientific, commercial, and civic buildings, focusing on innovation and enhancing the vitality of the public realm. Ennead are recipients of the Smithsonian Institution-Cooper Hewitt National Design Award, the AIA NY Medal of Honor, and the National AIA Firm Award, as well as numerous design awards for individual buildings. Since the opening of the Shanghai office in 2014, Ennead’s projects in China range from hi-tech and commercial office complexes, to adaptive re-use of existing historic and industrial buildings. Among these projects is the Huawei Wuhan Research and Development Campus and the Shanghai Astronomy Museum, opening later this year. 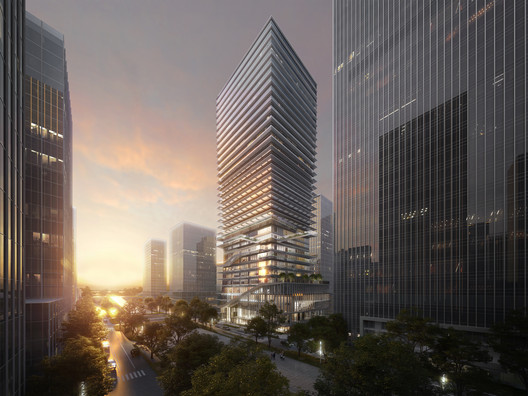