Save
Michelle and Barack Obama Sports Center by SPF: architects to be Los Angeles' First NZE Construction
Share
Or
Copy

Designed by SPF:architects, the Michelle and Barack Obama Sports Center in Baldwin Hills, Los Angeles, celebrates the center’s rich history and community commitment in an eco-friendly, prefabricated facility. Formerly known as the Rancho Cienega Sports Complex, the center will expand the pre-existing structure and provide additional recreational facilities but in a cost-effective way. Construction has been ongoing since 2018 and is set to be complete mid-summer of 2021. 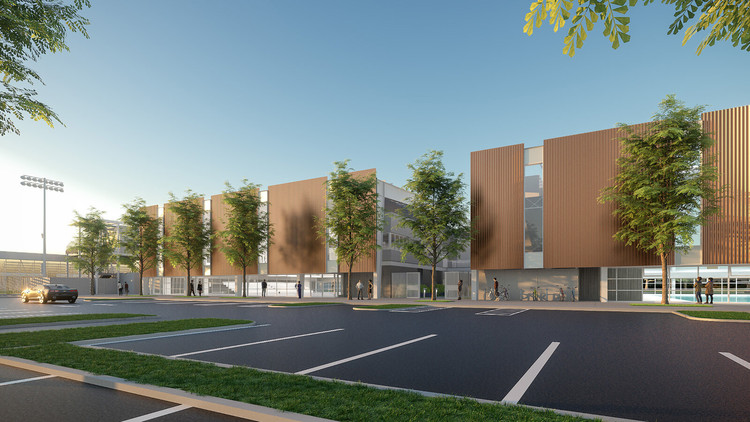 To maintain the cost-effective approach of the project, the architects used a pre-engineered metal building and combined it with architectural elements for construction and aesthetic purposes. The 40,000-square-foot building includes a 23,000-square-foot pool facility, a 16,000-square-foot basketball gymnasium, a raised walking track, seating areas that serve the tennis center and stadium, and an enclosed garden. Although the project has been ongoing since 2018, but prolonged construction was intended by the architects to avoid having complete closure of the park, so they divided it into several building phases.

The drought-tolerant landscaping was developed in partnership with Hood Design Studio, and was inspired by Mondrian's painting. The plot includes five distinct ecologies: high desert, canyon, coastal, chaparral, and medicinal, all implemented in a grid-like pattern. These spaces are extended to tie the buildings together and provide the visitors with usable parkland in the voids between each facility.

Since Net Zero is pursued throughout the design and construction of the project, extensive daylighting through solar tubes, natural ventilation, and a rooftop solar array are all implemented, along with several electric vehicle charging stations and bike racks to promote eco-friendly transportation.

Early this year, the former US president announced that the Barack Obama Presidential Center could break ground in August of 2021, after 4 years of delay, and will most likely take up to 4 years of construction. Designed by Tod Williams Billie Tsien Architects and Interactive Design Architects (IDEA), the center will include a museum, the Obama Foundation offices, a public library branch, an athletic center, and an outdoor recreation space. Michelle and Barack Obama Sports Center was only named in honor of the former president and is not affiliated with the Michelle and Barack Obama Foundation.

As for SPF:architects, the Los Angeles-based architecture firm completed the construction on their $80 million project WE3 at Water’s Edge in 2020, a six-story creative office building in Playa Vista. The project includes four floors of open creative workspace, with upper floors of the structure wrapped in a “floating” perforated aluminum skin.