Designed by Irish architecture firm Heneghan Peng, the long-awaited Grand Egyptian Museum devoted entirely to Egyptology is set to open this summer, sitting on the edge of the Giza Plateau, 2 km away from the Pyramids. Considered as the largest museum in the world dedicated to one civilization, the cultural complex will accommodate about 100,000 ancient artifacts, and will include 24,000m² of permanent exhibition space, a children’s museum, conference facilities, educational areas, a conservation center, and extensive gardens inside and around the museum's plan. 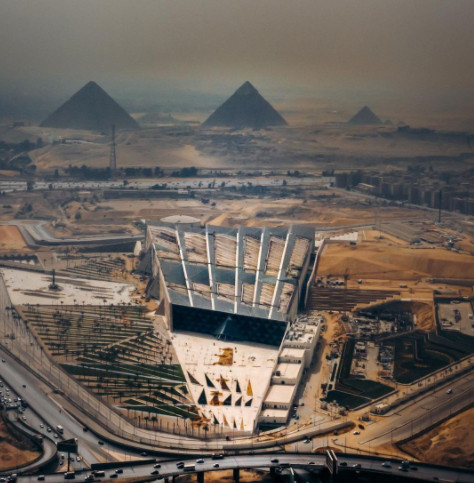 The design of the Grand Egyptian Museum was awarded to Heneghan Peng in 2003 after winning an international competition held by the Egyptian government. However, the design included a team of 300 people from 13 companies in 6 different countries as well. The Irish firm has worked alongside BuroHappold Engineering, and Arup for the engineering work, West 8 was involved in the landscaping design and master plan for the entire site, whereas German firm Atelier Brueckner was appointed to design the Tutankhamun galleries, Grand Stairs, Piazza Atrium, and the Children’s Museum.

The 500,000 square meter site's topography is defined by a 50-meter level difference created by the Nile river, as it carves its way from the desert to the Mediterranean. Although the Pyramids are located in the desert, the museum sits on both the valley and on the plateau, bringing together the two geological zones.

Due to the level difference of the desert's plateau, the design and allocation of the museum creates a new ‘edge’ to the topography, defined by grand translucent stone facade that changes from day to night. The design's framework was defined by a set of visual axes extending from the site towards the three neighboring pyramids. And as for the museum's general design concept, the architecture firm wanted to translate the museum's unique topography and give visitors "layered" experiences walking through the structure. Hence, each visitor moves through a monumental court upon entering the museum, followed by a shaded entrance area and a grand staircase that ascends to the plateau level, where all the galleries are located. Reaching that plateau level, visitors are able to the see the pyramids from within the museum.

The construction of the Grand Museum was divided into three stages:

Due to several delays in the construction, the museum exceeded its original budget, increasing its price tag to over $1 billion. Although the construction is currently at 98%, the inauguration date is yet to be determined by the Egyptian government, but it expected to be around summer time of 2021.