WXY Studio has partnered with the Downtown Davenport Partnership (DDP) to develop Davenport 30: A Resilient City, a new master plan that aims to provide a sustainable and inclusive city that reconnects its citizens to the surrounding neighborhoods. The award-winning architecture and urban design studio’s proposal focuses on revitalizing the city’s urban fabric and turning it into an innovative hub for businesses, entertainment, and leisure, all while prioritizing the citizens’ health.

Davenport is considered the most populated city between Minneapolis and St. Louis, with a lot of economical and social growth. However, the city has experienced numerous challenges, such as severe floods, civil unrest, and COVID-19 repercussions, to name a few. Over the past 20 years, the city has received several master planning efforts primarily to reinforce the city’s biggest asset, the Mississippi Riverfront. The currently-proposed design combined some elements of these previous proposals with extensive user experience research. In July 2020, DDP launched an online survey that asked citizens about the overall living standards of the city. Their responses helped shape the overall vision for Davenport 2030, and provide guidelines for the placemaking, mobility, and public safety in the area.

The implementation strategy is divided into three phases: Back to Baseline, Near-term, and Long-term. Throughout the first phase, which is expected to last 6 to 18 months, the project is set to be funded by existing streams and driven by partnerships and coordination by DDP, the city, or collaborative stakeholders. Quick-win action plans and projects that use low-cost materials such as murals, moveable urban furniture, art installations, outdoor entertainment will be implemented to help reinvigorate the downtown environment. As for the near-term plans, which are expected to last 2 to 5 years, new locally-driven funding streams will be identified to creative new incentives and developments within the city's core, such as the Ground Transportation Center site. Finally, the long-term plans are set for 6 to 10+ years, and will include a focus on large-scale developments and encourage the creation of new collaborations and investments in capital projects, such as parks, public spaces, streetscapes, and a renewed riverfront.

To be able to recuperate from the city's implications, grow again, and provide the citizens with a healthy place to work and live, the studio implemented a five-pillar framework guided by six themes.

WXY is an award-winning multi-disciplinary architecture and urban planning studio that specializes in finding innovative and sustainable solutions for public spaces, structures, and urban issues. The studio has proposed and developed several sustainable urban plans for cities across the United States such as Downtown Brooklyn, New York’s Governor’s Island, and New Jersey. One of their most recent proposals is in collaboration with Bjarke Ingels Group, and introduces a number of public spaces, streetscape & green infrastructure, which caters to the population of Downtown Brooklyn, and tackles major issues like congestion, lack of green spaces, interrupted bike lanes, and improper public infrastructure. 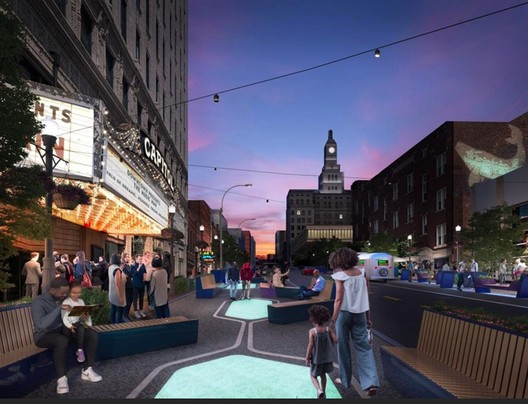