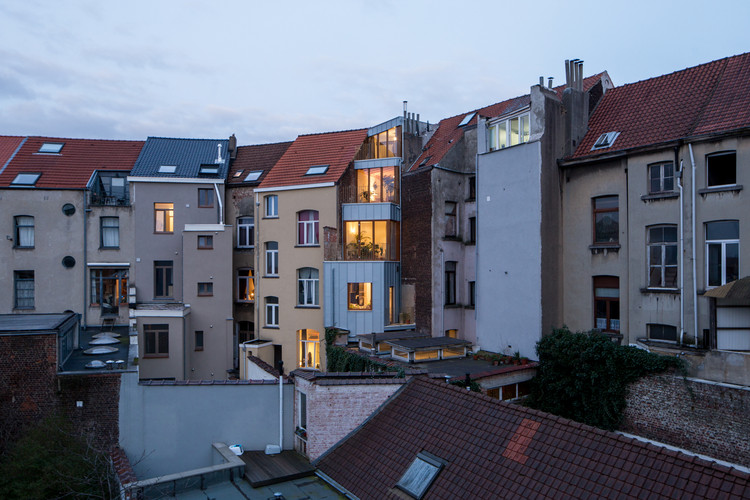 Text description provided by the architects. On the west side of the Place Hermann-Dumont, a complex of 3 houses, now protected, reflects an architectural project from the beginning of the 20th century. One of the three houses is located on the fold where the square meets the street. The Brussels typology then adapts to the contingencies of a corner plot. Today, the project is the starting point for a new reflection on living spaces. The living space is intended to have a ‘variable geometry’, allowing flexibility between common and private spaces, making it possible for several inhabitants to live together - a ‘kangaroo’ dwelling.

The access to the ground floor reveals a large open, triangular stairwell, lit with natural light. The first floor is organised in 3 rooms in a row. A dining room and a living room benefit from the light from the east, the kitchen looks to the west and the heart of the island. This floor will be common to both dwellings and is designed as a place for sharing and meeting.

On the second level, the first unit is a sequence of more private spaces and includes a bathroom, a dressing room, and a bedroom opening onto a winter garden.

On the top floor, the roof is raised and a new mezzanine is created. Flexible living space is installed there, taking advantage of a terrace overlooking the winter garden. A compact shower makes this part also autonomous. The stairwell is extended to the mezzanine, a space in the heights that extends onto a solarium and that can be used as a bedroom.

Through a series of spaces - the balcony, the winter garden, the terrace, the solarium - and unique material - a zinc coating - the project unifies the rear façade, often marked in Brussels by an additive construction and without any apparent order of annexes and extensions. 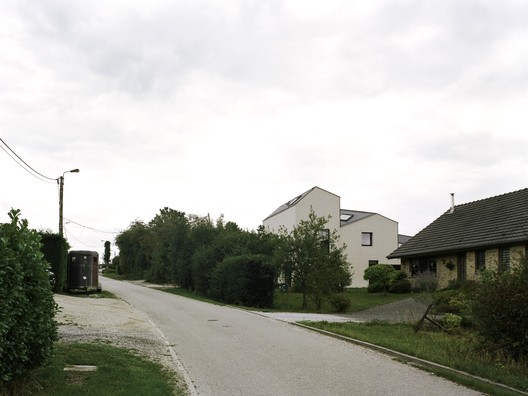