Save
Synergy, From a Monastery to a Music Conservatory / Brückner & Brückner Architekten 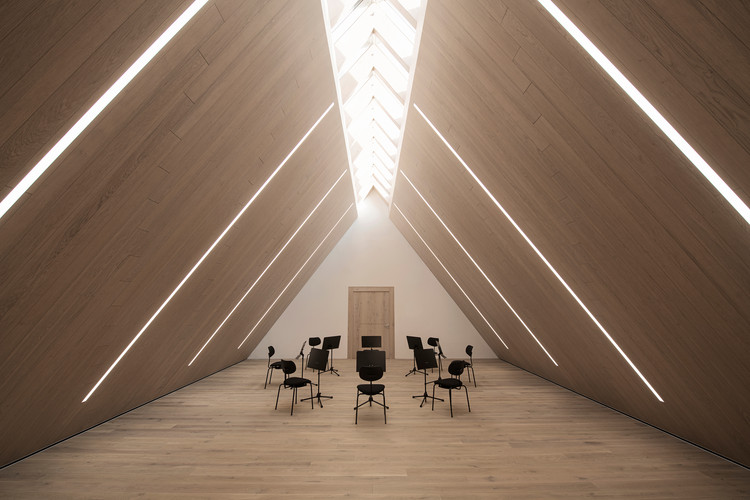 Text description provided by the architects. A composition of old and new, of past and future. A monastery is converted into a music conservatory. Walls were opened up, thus reactivating the historical gateways of the monastery building. The new contents are delicately integrated into the existing landmark building. We create clear, barrier-free pathways, visually connective points of reference and simple orientation. Our architectural objective was to preserve the soul of the buildings and the unpretentious, monastic atmosphere, while at the same time creating free space for the new: A space for the interchange of ideas and inspiration for the musicians, a vibrant, open house of music!

Since 1980, the Bavarian Music Academy has been occupying a section of the rooms of the Franciscan monastery as well as a newly built structure on the site of the former brewery adjacent to the monastery. In 2014, the Franciscans were forced to leave their monastery after having resided there for 365 years. This painful decision the convent was left with, however, at the same time presented a new opportunity for the building. In 2015, the Bavarian Music Academy acquired the grounds of the landmark monastery. This would allow for new life to once again blossom within the confines of the old walls. A wonderful act of divine providence. A monastery metamorphosed into a music conservatory.

At the heart of the monastery, the former cloister with an intersecting garden. A new centre emerges. We open up the walls and erect a glass roof above. One can’t help but feel that this place has been around forever. A large hall for dining, sitting, dancing, playing music or for interacting. A hall in the wide-open air, more exterior space than interior space – with an all-encompassing view and perspective of both inner and outer spheres. To the now open archways of the former cloister, the rehearsal rooms, adjacent to and above it. We’ve also carried over the theme of intersection into the first floor. The view stretches far out into the endless sky.

The result: an interplay of light and shadow. Both during the day and at night. A rare, unrivalled vision. Yet, there somehow still exists a sense of eternal permanence. What materialises is a clear structure and a pulsating place of convergence and communication. But even more, it’s a multi-functional, acoustically optimised and shaded central space for concerts, conferences or parties. Life and music permeate every nook and cranny. Our desire and passionate conception as a recollection of the building’s history: The symbols of “faith, hope and love” are represented in floral motifs engraved into the stone floor. They’re reminiscent of the boxwoods of the intersecting garden, which left the monastery along with the monks who once resided here.

Outside, around and above are the rehearsal rooms. Both big and small. Two exceptional rooms in the ceiling above. They engage in a unique dialogue. One of the rooms allows you to truly experience the historical roof truss, while the other acts as its contemporary counterpart. There’s also a sound studio with a recording room that’s interconnected with all the rehearsal rooms. Directly adjacent to the dining room are the new kitchen and a conference room, which can also serve as an extension of the dining room. In the former refectory and at once former foundational room of the academy is an additional rehearsal/meeting room.

Today, the musicians sleep in the south wing, where the monks once also used to sleep. We transformed the historic monastery cubicles with their historic doors into modern guest rooms with a private bath, which serve as a space of tranquillity and contemplation. Away from the hustle and bustle of the dining room and the large rehearsal rooms.

The north-east wing offers both old and new perspectives into the church. In the east-wing, a courtyard with a terrace furnished with an outside seating area for the dining room, and in the west-wing, the serenade courtyard for open-air concerts and parties.

Our concept is predominated by monastic minimalism and natural, sustainable materials that wait, as if in calm repose, to awake to the resplendent light of a new morning. Natural stone, oak and lime plaster, light colours. The historic doors and plasters have been refurbished and restored. All of the rehearsal rooms and the dining room are furnished with the most state-of-the-art acoustics. 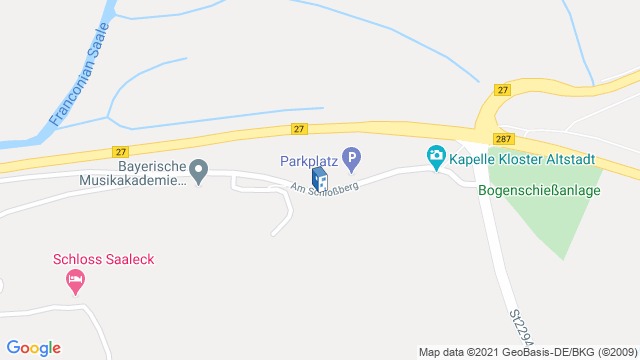 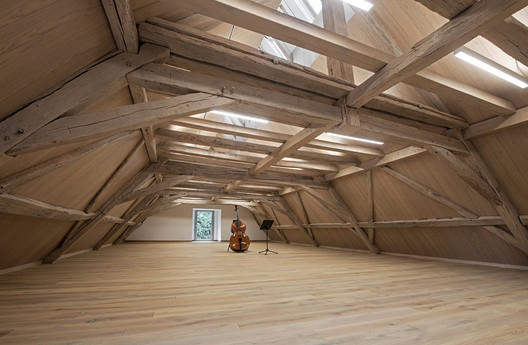