Researchers point out that "proto-greenhouses" arose to fulfill the desire of the Roman Emperor Tiberius (42 BC to 37 AD) to eat cucumbers every day of the year. Since it was impossible to grow the vegetable on the island of Capri in winter, his gardeners developed beds mounted on wheels that they would move into the sun when possible, while on winter days they would place them under translucent covers made of Selenite (a type of gypsum with a glassy appearance). But the production of large-scale greenhouses only became possible after the Industrial Revolution with the availability of mass-produced glass sheets. Since then, they have been used to grow food and flowers, forming a microclimate suitable for plant species even in places with severe climates. But in some cases, these artificial growing conditions can also form interesting living spaces. The recent Lacaton & Vassal awards rekindled this interest. How is it possible to create greenhouses that can be good for both humans and plants?

To summarize, the greenhouse is a structure with walls and roofs made mostly of transparent or translucent materials, such as glass, polycarbonate, plastic sheets, or fabric. Its operation is simple to understand: when sunlight enters the structure, it is absorbed by plants, soil, and any other surface or object, converted into infrared energy. The heat generated, in turn, is unable to leave the greenhouse as easily, forcing the warmer air to remain inside and thus providing adequate levels of heat and humidity to the plants.

Innovations involving such structures have developed over time and are widely seen in rural landscapes. In countries with colder climates, small greenhouses attached to residences are often used as both places for growing plants and living spaces for the inhabitants. More common in the Nordic and lower countries, these small greenhouses are also used as dining and reading spaces. The French firm Lacaton & Vassal brought this typology to more audacious projects and therefore into the mainstream. At Maison Latapie, one of the duo's first projects, an opaque volume and a greenhouse with the same dimensions shape the building with simple and inexpensive forms and materials. In fact, this seems to be one of the main attractions for the use of greenhouses: generally shaped by elementary shapes, the structure can be built using relatively economical materials.

Going back a few decades, in the 1970s, the Swedish architect Bengt Warne developed a concept that is still replicated in cold countries today. Called Naturhus, instead of converting an existing structure or creating annexes to an existing structure, it surrounded the entire building with a huge glass greenhouse. The greenhouse creates new intermediary spaces, formerly exterior, which allow for the cultivation of plants and occupation of spaces that are almost exterior but protected from the winds and rain. This is the main characteristic of greenhouses, a buffer between outside and inside, providing a freer life in the cold months and, especially, reducing the demand for heating indoor spaces, significantly reducing energy consumption.

This concept inspired much of the Uppgrenna Nature House project by Tailor Made arkitekter. According to the architects, “the greenhouse allows a closed local circuit for recycling sewage waste. Large beds clean and absorb nutrients from wastewater and convert them into fruits and vegetables. The house does not require connection to the municipal sewer. Living in a greenhouse encourages a sustainable and non-toxic lifestyle. It is very clear why you should not emit pollutants into the environment, it goes back to your own recycling system. ” At joen taillieu architecten's Paddenbroek Education Center, the old farmhouse underwent a metamorphosis when the farmhouse was dismantled and a volume of glass and steel was built around it to maximize the flexibility and shared use of space.

But greenhouses can be integrated into the building project as well. At the “De Buitenkans” School, a simple volume intersperses opaque and translucent parts. In this project in Hungary, by IR architecture, translucent panels enclose the social parts of this rest cabin for explorers in the region. At Maison + Agence, a project by Hérard & da Costa, a greenhouse for growing food is integrated between two opaque volumes that contain the rooms.

Greenhouses create spaces that are generally very simple and flooded with natural light. According to Lester van Ree [1], who developed comprehensive research on the topic, different bibliographic sources mention that the indoor climate of residential greenhouses is comfortable and that the air temperature will become approximately 3 to 5 ° C higher than that of the environment. In hotter months, this can become a problem. In fact, the biggest disadvantage when working with a greenhouse is the risk of overheating in the summer. If in winter the idea is to have a completely watertight structure, not allowing the heat to escape, in the summer openings located in the upper parts might provide air circulation and the expulsion of warmer air. However, the same author of the study mentions that, in the summer, it is possible for greenhouses to have lower temperatures than outside, if proper precautions for shading and ventilation are taken. On the market, there are currently special types of glass that block most infrared rays, allowing only sunlight to pass through, which can be advantageous for living. A new building by Saint-Gobain, an important manufacturer of glass, shows how it is possible to create completely glazed spaces while maintaining thermal comfort for the occupants and energy efficiency in the use of air conditioning. These new glass technologies allow us to think of greenhouses as a more plausible option or to create hybrid houses with closed and opaque areas and open and transparent areas. There are already greenhouses equipped with sensors that autonomously control the opening of the windows and the exchange of heat and air to keep the interior temperature stable. But these deserve another article just for them.

Greenhouses work very well for cold climates, but in hot and humid places they might not be recommended for homes or spaces of great permanence and consistent occupancy. However, what impresses most in greenhouses is the possibility of building spaces with common and low-cost materials, simultaneously offering countless possibilities for use and adaptation. As Lacaton & Vassal claim, they are pleasant spaces both for plants and for us. Check out other examples of architectures that integrate greenhouses in this My ArchDaily folder. 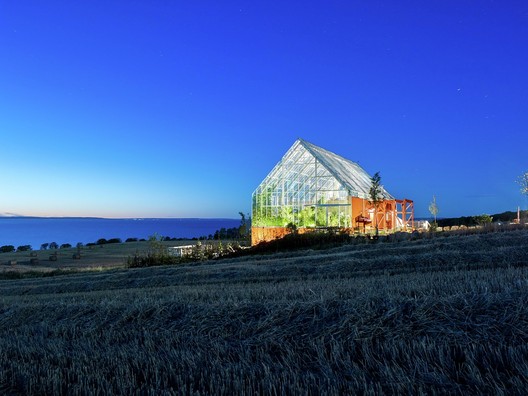