Save
“The Tree that Escaped the Crowded Forest”: Lessons from Frank Lloyd Wright’s Price Tower
Share
Or
Copy

Frank Lloyd Wright’s Price Tower is the famous American architect’s only realized high-rise building and one of his only extant vertically-oriented designs. Located in the plains of Bartlesville, Oklahoma and commissioned by the local oil and chemical firm H. C. Price Company, the mixed-use tower is significant not only for its singularity within Wright’s oeuvre, but because of its unique materials and structural design. Some of Wright’s innovations, which were novel in the mid-twentieth century, remain useful even today.

Wright famously nicknamed the tower “the tree that escaped the crowded forest.” This short, but evocative phrase brings to a point much of what makes the Price Tower so meaningful even today. The high-rise was designed around a core or ‘trunk’ of four elevator shafts, which functions as both the primary structural support and an integrating element around which the rest of the design evolves. Each of the tower’s floor plates are cantilevered from this central trunk, resembling the branches of a tree. Accordingly, the building’s outer walls are lined with long copper wings, their textured green patina suggestive of leaves. Supposedly, the asymmetrical design looks different from every angle, and in that way resembles the natural but all-the-more-beautiful imperfections of a tree. The tower therefore exquisitely merges practical and conceptual concerns through its measured consideration of material and structural design, with essential structural elements serving simultaneously as abstract design pieces. Despite the peculiarity of a high-rise office design in Wright’s portfolio, the architect thus manages to bring his defining interest in nature to a structure—the skyscraper—considered exemplary of the man-made and the urban. As commercial architects today increasingly bring natural inspiration to their most contemporary designs, and as even the tallest skyscrapers are urged to meet the most stringent sustainability guidelines, this 1950s application of nature to the high-rise seems more relevant—if not prescient—than ever.

Conceptual motifs fuse with structural plans in other important ways: the floor plan is based on the Price Company logo, reproduced on a bronze plaque lying at the exact center of the ground floor. The unique parallelogram shape also demarcates four quadrants according to which programs are dedicated: one for residences and three for offices. Wright in other words surreptitiously grounds his client in the very foundations of his design, innovating his structure in yet another way. Moreover, his acclaimed eye for geometricity—reproduced literally in the façade’s patterned copper plates—thus makes its way to the tower’s plan as well.

Materially, the tower was inventive for its time—utilizing cast concrete walls, concrete floors, aluminum-trimmed windows and doors, and patinated copper panels. Today, these materials—especially the concrete—might be seen as unsustainable, but we can continue to glean lessons from them in other ways. Wright, as an architect consistently interested in the reproduction and reflection of nature in his designs, utilized the same materials on the tower’s interior and exterior, deliberately blurring the boundary between inside and outside. The building’s purposely large windows also opened the Oklahoma prairie to all inhabitants, mediated by the patinated green ‘leaves’ of the façade. Wright, as all architects should be, was exhaustively considerate of his building’s surroundings, and therefore of the materials to use and how to use them. Price Tower was in a gorgeous natural setting—the Oklahoma plains—and therefore had to reflect that.

This consideration of site offers another dimension to Wright’s phrase “the tree that escaped the crowded forest.” Away from the congested high-rises of the city, the Price Tower was able to reveal its many innovations—a copper façade, cantilevered floors, asymmetrical design, a flexible spatial configuration, and large windows—uninhibited. It continues to stand there, now a protected monument due to its architect’s fame. But as much as it has been designated a relic—a National Historic Landmark, even, by the United States government—many of its structural and material innovations could still carry important lessons today. Seventy years later, its thoughtfulness toward its surrounding landscape, its deft management of conceptual and practical considerations, and its artful use of materials might serve as a useful model for architects even now.

Read more about this project here. 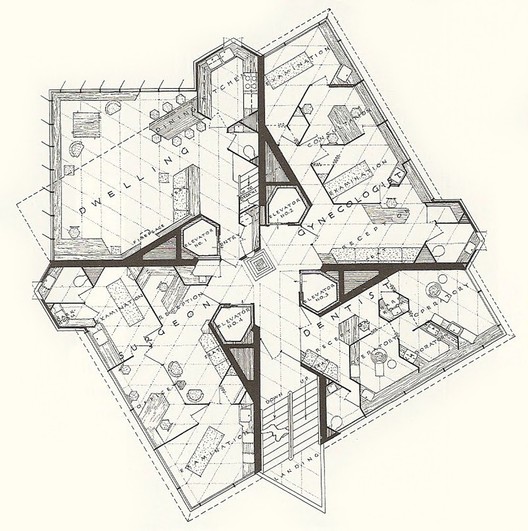