Save
Circular Openings: From Boats to Contemporary Architecture
Share
Or
Copy

There are two main reasons why boat windows are round. They are easier to seal and, above all, more resistant to the high pressure that water exerts on them. This is because living corners are places where tensions are naturally concentrated, weakening the structure as a whole. This is also why aircraft windows are small and round; high pressures are better distributed in curved shapes, reducing the likelihood of cracks or breaks.

In architecture, circular openings are quite old. The Oculus, a type of circular window, has been a feature of classical architecture since the 16th century. Also known by the French expression oeil de boeuf (bull's eye), circular or semi-circular openings are formed from the construction of masonry arches, which allow for the creation of openings only by locking the constitutive pieces. Over time and following the incorporation of new technologies and development of construction knowledge, creating rectangular openings in buildings has become easier, more efficient, and cheaper than creating round ones. However, these circular windows still continue to figure in a multitude of projects.

In the realm of modern architecture, we would be remiss to fail to mention Louis Kahn and the various iconic circular openings created in his designs. In the Maison Bordeaux project, a few decades later, Rem Koolhaas proposed a house that was a compilation of three distinct overlapping volumes with a complex structural arrangement. Both in the basement and on the second floor, the structure is punctuated by several circular openings, some operable, others fixed.

Despite being used more for aesthetic than functional reasons, circular windows are quite common in contemporary architecture, ranging across the most diverse scales and purposes. In the estudio eyc project in Spain, for example, the architects used recycled aluminum portholes from an old boat, which gave the building near the sea a unique look.

The most common use of circular frames is to harmonize with the other shapes of the project. Bernard Tschumi, in his project for the Binhai Science Museum, designed the building as a series of large scale cones. The frames, all circular, balance with the curved volumes of the monumental building.

There are times when circular openings work to break the stiffness of the built volumes or their facades. In the X-TU project for the Commissariat of Police in France, a series of portholes lined with opalescent cylinders punctuate the facade and illuminate it at night. In Singapore, in the “Design Orchard” Incubator, circles were included to liven up a gable: “Concrete walls are strategically perforated with circular openings and built-in precast concrete frames to allow for light, views, ventilation, and even store windows through the concrete wall without affecting structural integrity. ” In Vultureni House, by TECON Architects, the rigor of straight shapes is combined with playful circular openings that accompany it along the facade to the main entrance. In a multifamily project in Australia by BKK Architects, six large glass windows perforate the facade, introducing formal creativity and reducing the overall mass of the building to make it sit more amicably in its lower-profile built environment.

For an elementary school in the Netherlands, by Moke Architecten, circular frames and a red scale-like coating give the building a unique expression that highlights it within its surroundings and emphasizes its public function. In China, a huge educational building with a library, theater, and other programs attracts attention due to its shape and colors. The sloping roof and pointed skylights of the OPEN Architecture's Pinghe Bibliotheater, together with ship-inspired portholes and the attractive blue color, leave a strong impression on passers-by.

At Nartarchitects' Lookout Tower at Galyateto, the approach is different. The project is an observation tower on a national tourist route that crosses northern Hungary between hills. “In the inner core of the extension's concrete structure are 3 camping shelters illuminated with colored circular windows, creating a special environment for hikers who wish to rest a little during their journey.”

The presence of circular openings can also be symbolic. In this Melbourne project, “the building offers a panoptic presence in a location known for its security challenges. Marked by prominent portals, the circular mirrored windows on the facade accentuate the motif of a camera's monocle. ” In the project for Mr. Barrett’s House, the option was to highlight and differentiate the new from the old. According to the architects, “in terms of preservation and renovation, the palimpsestic character of such a building is fully assumed. Its history and nature are made up of successive layers that shape its life. This is one of the reasons for creating round holes in the facade. They affirm their contemporaneity that will disappear with time and become part of the building's vernacular nature. ”

In the Prague waterfront revitalization project, led by the petrjanda / brainwork office, the project focused on the reconstruction of 20 riverside wall vaults (originally ice storage areas). Instead of creating classic interiors, the vaults merge with the outside and maximize contact between the riverside area and the river, with the stone closures having been knocked over and replaced by large-format round glass windows that open by diagonal rotation inside the frame.

Openings and circular frames can represent a certain extra difficulty and higher construction costs, but they can also be an important device for different contexts. See some more examples of circular window uses in this My ArchDaily folder. 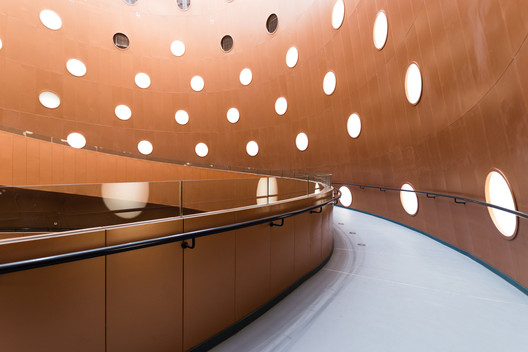