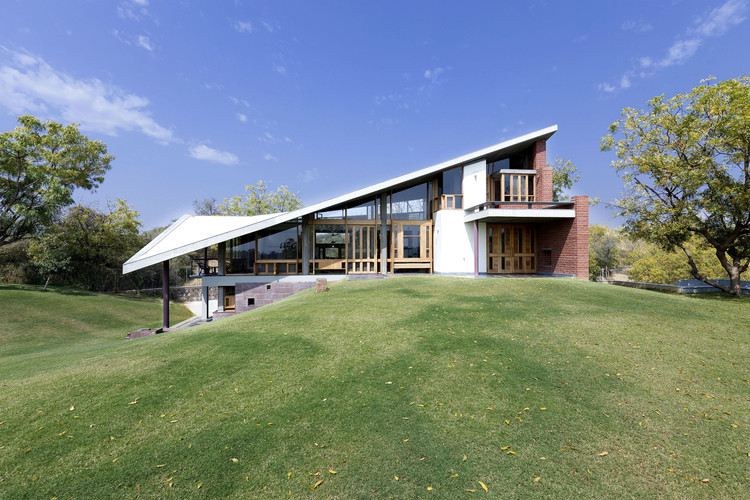 Context - Project was an opportunity to engage with a pristine, forested site, located on the banks of Sabarmati river near Ahmedabad. Shaped by the region’s riverine landscape, the undulating site is approached from the north and included a plateau- 15M from the water level- towards its western edge. From here, the site sloped down eastwards as one approached the river’s edge. All constructional decisions were made to preserve the original land form and ecology of the site with limited interference.

Siting - Principal built masses – the house, swimming pool and water tower – are located around the highest plateau. Leaving it free for outdoor activity, the house’s rectangular mass is pushed back and placed horizontally, with its longer side facing the river. Across the valley, the swimming pool is carved into the adjoining earth-mound along its slope. Further south, the masonry water tower rises from the highest point of the opposite hill.

As linear blocks, the house, pool and water tower are oriented along different coordinate axes to engage three-dimensionally with the site. In each, different floors and landings are worked out to be accessible from varying levels of the landscape. Collectively, the built form belongs to the natural setting by such sculptural engagement- opening through disposition and movement new ways of experiencing the exterior space and unravelling its majesty.

Section develops by scooping out a rectangular void at the plateau’s edge. The dialogue with landform commences through this inceptive act of the imminent built-form making an imprint into the topography. Into this, floors, walls & columns are introduced to form the core of the house. Finally, the hyperbolic paraboloid roof is modulated to follow the natural gradient of the ground below. Mirroring the landscape, it reintroduces the original shape of the hill- lost initially to construction- to envelop the entire house from above and characterize its spatial experience.

Structure, Construction & Materials - The project uses a composite structural system. The RCC roof is cast manually, using pinewood shuttering. Teakwood and glass panels are used to make door and windows. In places, they are carefully thickened to integrate furniture into them and become inhabitable zones. Elsewhere, they are made much thinner to wrap around the structure and maximize the view. Exterior stone cladding extends till the basement, eliminating the need for visible plinth protection. It expresses limits of building’s intervention into the landscape, allowing it to be perceived as literally growing out of the ground. 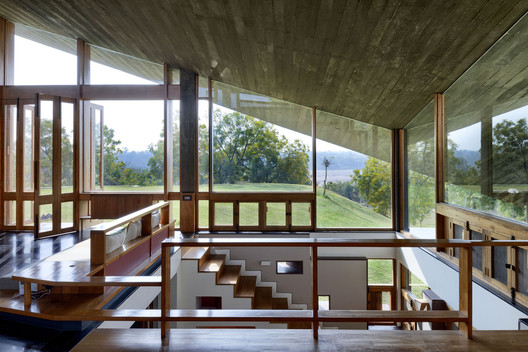 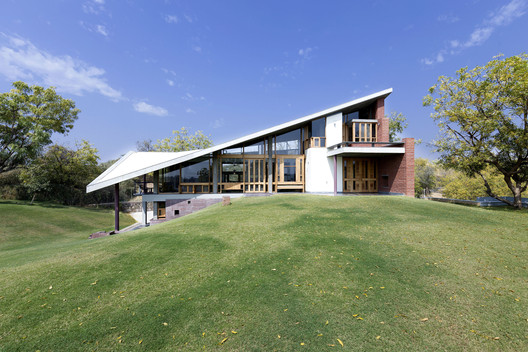