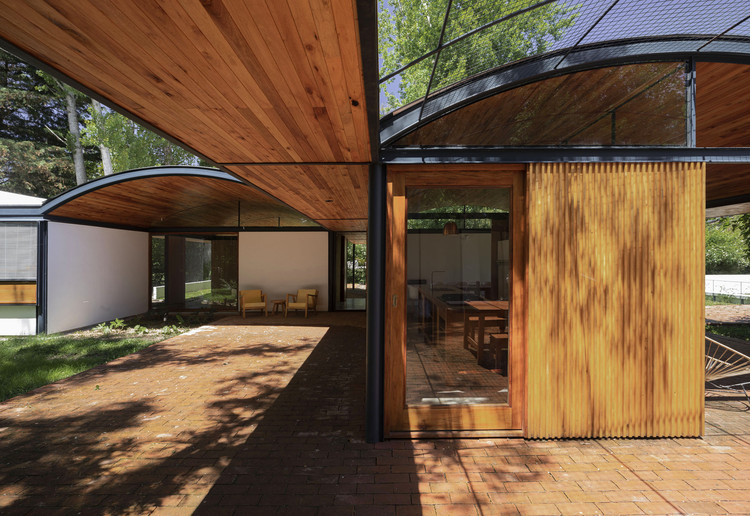 Text description provided by the architects. The clients imagined their house as a refuge among trees where they could receive friends and spend a lot of time with the family. They were very familiar with the place and its virtues, a consolidated neighbourhood located within the Exaltación de la Cruz district, in the Province of Buenos Aires.  An area whose development has modified over the years from a neighbourhood of summer houses into an area of permanent homes.

The project is constructed with a metallic structure and dry construction, designed as a systematized plan made up of modules that are articulated in their entirety. The lower spaces define the lintels of the enclosure plan and solve the channels that receive rainwater, at the same time that they make up galleries and service areas, while the higher spaces constitute the living places.

The house is located in the middle of the lot, in an area of low houses and lush vegetation. A cruciform floorplan dedicates one wing to the intimate spaces and another to the spaces of social nature, establishing a kind of Cartesian axes, which defines four instances of spaces and exterior contemplation.

The lot has by virtue a highly developed vegetation that characterizes the spaces. At the entrance, an aguaribay tree consolidates an arrival area and a place of discovery. The linear development of a brick floor initiates the journey and concludes when reaching a garden to the east, characterized by poplar tres, projected to the living room. The shadow of an aged oak hierarchizes the moment of entering the house. The social wing that is made up of the dining room, kitchen and barbeque area, is interpreted as a threshold that defines two areas while receiving morning light filtered by a forest of white acacia trees, seen from the bedrooms.

On the other side of the threshold, an open and playful extension is consolidated next to the pool area, a terrace area as an expansion of the dining room, located in the shade of a persimmon tree. 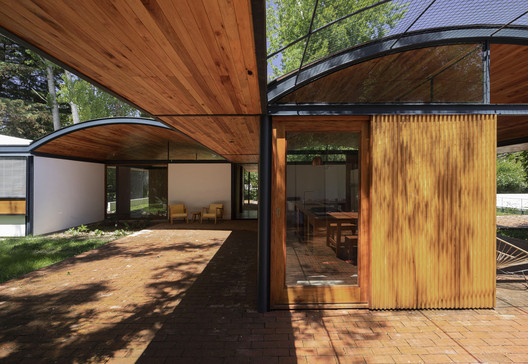