Urban infrastructures provide comfort to inhabitants and mitigate the risks of disasters such as flooding. Underground systems specifically conceal urban infrastructures from public view and are configured as real mazes under the streets. The distribution of drinking water, urban drainage, sewage, and even electrical wiring and fiber optics in some cases, pass under our feet without us noticing. To this end, the industry developed precast concrete parts for about 100 years that provided construction speed, adequate resistance to force, and durability against time. Concrete pipes with circular sections, in many diverse diameters, are perhaps the most used conduits and are ubiquitous around the world. But there are also those who use these apparently functional elements in creative architectural contexts as well.

Concrete tubes are rigid ducts that may or may not contain metallic reinforcement according to their structural demands. Their geometry allows them to properly support the weight of the earth and other structural loads. These parts are dimensioned and specified according to flow, specificity of program (rainwater or sewage / effluent conduction), and mechanical resistance. In architecture, perhaps the first use of such elements that comes to mind is in playgrounds. A concrete tube is, in itself, a fun toy.

Also for children, in H&P Architects' Toigetation 2 Sanitary Infrastructure, sections of tubes were used as washbasins suitable for the height of children, creating a unique use for the pieces placed upright.

But these elements can also be used as vertical, stacked surfaces. In the VARDAstudio project, an envelope of concrete tubes, available close to the work, filter the views into and out of the house, demarcating where the privacy of the residence ends. This heavy, earthy, and low technology also provides additional protection from the environment, specifically from the sun and air.

In the Prahran Hotel, by Techne Architecture + Interior Design, large concrete tubes are used widely throughout the project, whether in forming an additional contemporary facade next to the historic building, or in bringing the same elements to the interior. In the words of the architects: “The use of large stacked concrete pipes for the street facade of the addition struck a chord for multiple reasons: they have a depth and can be interactive, they have a dramatic, sculptural quality, they reference existing internal circular motifs and they suggest stacked kegs or barrels.”

The versatility of the dimensions of these parts, whether in cross section or length, allows them to be used for even more complex programs. Inspired by architect Andreas Strauss' 2006 project Desparkhotel, which used recycled concrete tubes for hotel rooms, the TuboHotel project by T3arc in Mexico mobilizes a similar solution. Each simple module contains a double bed supported by the walls of the tube, with the entrance enclosed by a metal and glass frame. Due to the strength of the tubes, the hotel has groups of up to 3 stacked pieces, in which the upper one is accessible by an external staircase.

But there are also architects who go further with their experimentation. The OPod Tube House, designed by James Law Cybertecture, is a low-cost experimental housing unit, or micro-dwelling, built from a concrete water pipe 2.5 meters in diameter. The project uses the concrete structure to house an apartment for one or two people with a living room, kitchen, and bathroom enclosed in 9.29 square meters of space. The pieces can stack to become a low-rise housing community in a very short time and can be conveniently located and relocated to different locations.

Whether or not the tubes provide adequate quality of life for its residents is another debate. But the examples gathered here serve to show that architecture can reimagine the most diverse elements to shape spaces that are interesting to users. The possibilities are endless. 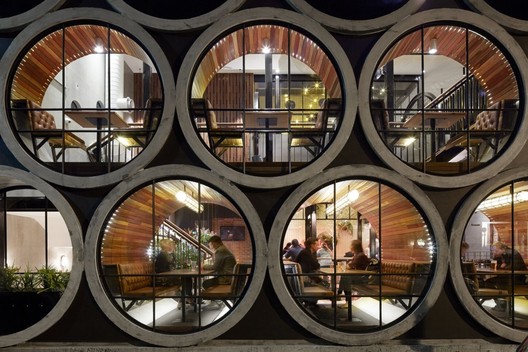