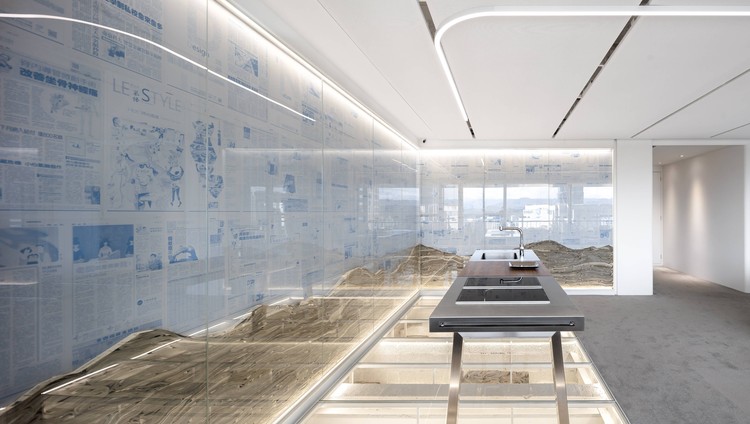 Text description provided by the architects. On the Formosa island amongst the northern mountain ranges, where a lake vanished and the basin under revealed, a city was built and thrived. Situated at the most cosmopolitan district of Taipei city, Xinyi District, the project sits over twenty stories above the ground inside of a new residential tower, looking out to the prominent Taipei 101 building and distant mountain ranges, and beholding the intertwining skylines of the soft-edged landscape and the growing cityscape.

In 2014, the United Daily News Group demolished their original headquarter buildings at this site and built two high-rise buildings for residential and commercial use. Although we were commissioned by them to design the onsite real estate office for the residential sector, we envisioned it to be more than a commercial workplace. We hope to acknowledge the enterprise’s background as a celebration for its more than six decades of establishment.

Our visit to the newspaper factory inspired us to look at the possibility of integrating two newspaper medium at the new office: newspapers and aluminum print plates. In piles of newspaper archive, obsolete ink texts and pictures became patterns. The stacks also create another sectional pattern defined by coloring and width of the newspaper sheets.

We perceive this to be an opportunity to embed memories of the past urban events in the space, for its quality of being as light and vulnerable as the paper, and as heavy and substantial as the history it carries. To invest time to turn a non-conventional building material into an architectural element was quite a challenge for us. Over two years of planning, various ways of assemblage were sampled and tested. At the end L-shaped aluminum stripes were used for fixing the newspaper bundles.

The aluminum print plates with light blue texts were rearranged to serve as the backing board. They also provide an unfolded plan view of the newspaper. The surface glass panels seal the newspapers and reflect the objects from the interior and exterior. The feature wall was composed in layers of different texture and materiality, together they form a condensed silhouette of the past events, an artistic installation, and a reminder of the surrounding nature for the occupants.

In this boutique open plan office, the reception lounge is niched between the external windows and L-shaped feature wall. The feature wall diffuses, refracts and reflects lights, including the carefully placed indirect light that enhances the patterns of the stacked newspaper, the linear ceiling light that unifies the space, and the natural and artificial lighting from the outside.

We have chosen newspaper as a material that bears the weight of word power and reported events. The accumulation of time allows this medium to also accumulate itself into a spatial expression, which forms a wavy paper line that echoes with the skyline of the Taipei city. It is a cultural conversation between the given context and humanity, and also an exhibit of the past events and present reality. 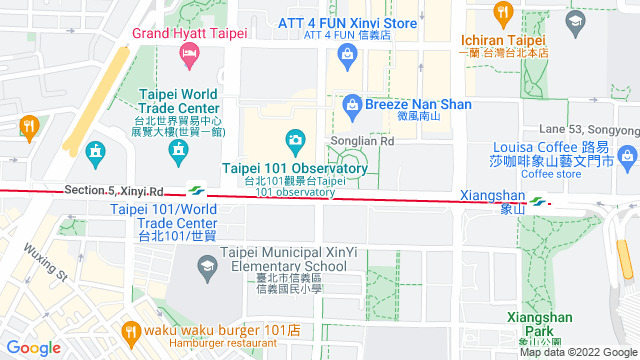 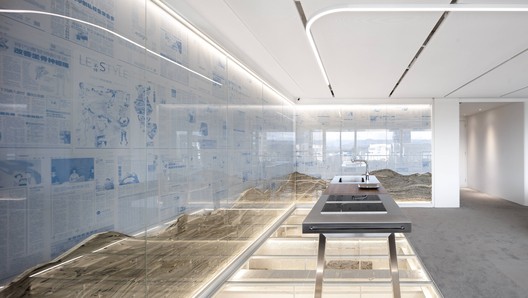