The American Midwest is making a new name for itself. While cities like New York and Los Angeles are known as global design capitals, dynamic modern architecture has begun emerging across the country’s fly-over states. Advocating world-class architecture, sustainability, and craft, Kansas City has become a leader in great American design. 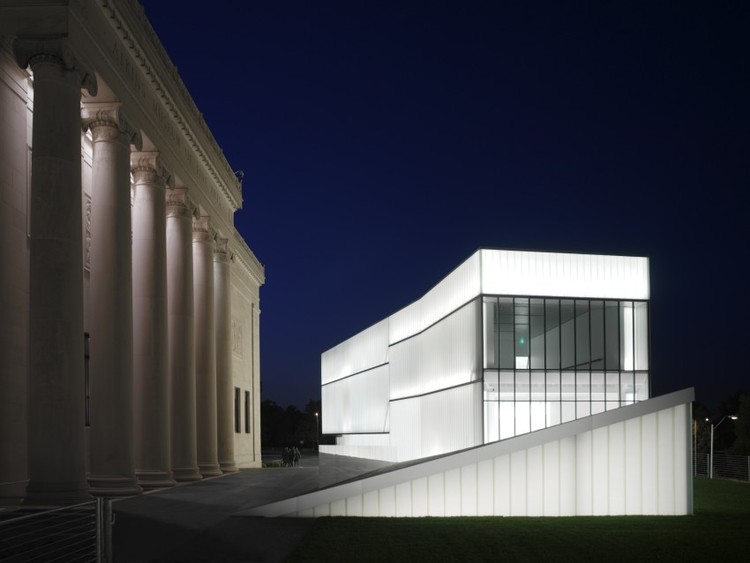 Undergoing radical transformation, the “Paris of the Plains” has experienced significant social, economic, and cultural change within the last twenty years. These larger forces have underpinned the city’s evolution. Home to some of the country’s finest examples of Art Deco Style buildings, Kansas City also leads the world in sports architecture. Firms like Populous and 360 Architecture (now under HOK) have built iconic designs, including London’s 2012 Olympic Stadium and Kansas city’s own Sprint Center. Today, Kansas City boasts some of the most celebrated civic and public projects in the United States.

Boulevard Brewing Company desired a fast-track process for design and construction for an expansion project that would add (8) 40’-0” tall tanks to a 15’-0” tall existing structure. The tanks, planned for the production of hops beer, needed to be accessed 24 hours a day to regulate the addition of ingredients. BBC selected a project team assembled by an architect-led design-build delivery process to execute a complex assembly of components within very tight quarters.

Bridging between the present and future of art, the new David T. Beals III Studio for Art and Technology at the Kansas City Art Institute creates a flexible, technology-rich learning and working environment that supports the prototyping and development of innovative student projects. Recognizing the Institute’s need for a space that helps students become skilled in using digital fabrication technologies to communicate their ideas, Gould Evans responded by designing a versatile, open, daylit volume to provide maximum flexibility, both as a daily work space and over time as educational programming and technology evolves.

The opportunity to design a major new performing arts center was precipitated by two significant decisions: the selection of an extraordinary site crowning the escarpment overlooking the historic warehouse district and the new entertainment district, affording a 180° view of the horizon; and the decision to construct two dedicated halls for symphony, ballet, opera, and theater. Downtown Kansas City, set upon a plateau, extends southwards towards an escarpment from where it descends, opening to an expansive view, which is further accentuated by the flat prairie landscape.

A co-founder of H&R Block and long-time benefactor to his city, Henry W. Bloch recently presented a generous gift to the University of Missouri-Kansas City’s Bloch School of Management for the creation of the next generation of business school facilities the new Henry W. Bloch Executive Hall for Entrepreneurship and Innovation. For the new facility, BNIM and Moore Ruble Yudell worked closely with the Bloch School of Management and the university to develop a unique program that reinforces the school’s core values.

Zahner’s continuing success as one of the world’s foremost architectural metal manufacturers prompted the need for an expansion of their manufacturing facility at 8th and Paseo Blvd. in Kansas City, Missouri. The location for the expansion ties into the northern façade of a 30-year-old weathering steel clad facility and re-imagines a roughly paved concrete assembly yard surrounded by an unsightly chain link fence. The design intent was to convert this underutilized area into a large column-free assembly space, with ample clear height to move material around on 2 large cranes, and make a seamless connection to the existing factory floor.

A triangular-shaped, glass-walled labyrinth designed by acclaimed artist and Kansas City native Robert Morris was installed in the Donald J. Hall Sculpture Park at The Nelson-Atkins Museum of Art. This dynamic sculpture provides visitors with an intimate experience, enticing them to interact with the art by winding through the glass maze. The installation of Glass Labyrinth in the southeast section of the park marks the start of a six-month long celebration of the 25th anniversary of the Donald J. Hall Sculpture Park.

The expansion of The Nelson Atkins Museum of Art fuses architecture with landscape to create an experiential architecture that unfolds for visitors as it is perceived through each individual's movement through space and time. The new addition, named the Bloch Building, engages the existing sculpture garden, transforming the entire Museum site into the precinct of the visitor's experience. The new addition extends along the eastern edge of the campus, and is distinguished by five glass lenses, traversing from the existing building through the Sculpture Park to form new spaces and angles of vision.

This Catholic independent college preparatory school for young women wanted to add a new chapel and academic space on the main campus quadrangle. After surveying students and faculty, a vision for the chapel emerged as a soft, feminine, contemplative space flooded with light and connected to nature. There was a strong desire to connect to the narrative of St. Teresa, the patron saint of lace makers. Achieving harmony between sacred and secular is the very essence of the school’s mission, and was the charge facing the design team.

Prairie Logic is a collaboration between Brooklyn-based artist Janet Zweig and El Dorado. Comprised of a full scale perforated aluminum boxcar in a 25,000 square foot sea of native prairie grass, it was commissioned by the City of Kansas City, Missouri as part of their 1% for Art program. The work was situated on a half-acre planted roof 4 stories above Main Street in Downtown Kansas City. It was designed to be experienced at three different scales: viewed from the neighboring skyscrapers looking down; viewed in the distance from the green roof; and experienced close up as both a place of solitary contemplation and as a performance space.