Save
Works by David Adjaye, Daniel Libeskind, and More for Bid to Support Black Women Architecture Students
Share
Or
Copy

Net proceeds from the auction, which kicked off December 14 and finished December 20, will benefit the Desiree V. Cooper Memorial Fund, a scholarship for Black women architecture students established by the Architects Foundation in honor of the fund’s namesake, a Washington, D.C.-area architect who passed away in 2015. As noted by a press release from ARCH, Cooper, who was a Black woman, “is recognized for using her practice to improve and make long-lasting social change within communities.” African American women are wildly underrepresented in the architecture profession, making up 0.3 percent of licensed architects practicing in the United States. With the ultimate goal of driving this historically low number up, the fund provides financial support to qualifying students attending any NAAB-accredited school.

“With critical volunteer interest and support, Architects Foundation was able to relaunch fundraising for this award in 2020 and will award our first scholarship in 2021,” said James Walbridge, president of the Architects Foundation, in a statement. “Help us continue the momentum and honor Desiree’s memory by creating a pathway to equity in architecture.”

Spatial Education and the Future of African Cities: An Interview with Matri-Archi

Among the works up for auction are an Adjaye-produced sketch in 24K gold leaf of his Abrahamic Family House in Abu Dhabi; a charcoal sketch of Berlin’s Jewish Museum by Libeskind; a framed laser-cut MDF model by Rojkind; a delightful section of a hamburger by Bonner; and a tongue-in-cheek floor plan for an imaginary Donald Trump Presidential Library, by New York-based architect and educator Mark Foster Gage. Other architects and firms that contributed to the cause include Forensic Architecture, Office of Architecture (OA), Hany Hassan of Beyer Blinder Belle, FORMA, Overlay Office, Hernan Diaz Alonso, and many more.

Starting bids begin at $50 and go as high as $2,000 and there’s truly something for everyone for those still on the prowl for meaningful, last-minute holiday gifts that happen to support a most worthy cause. 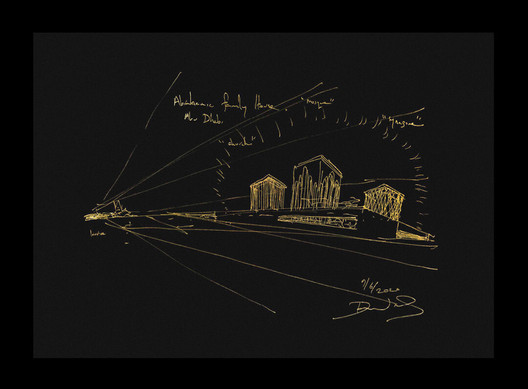