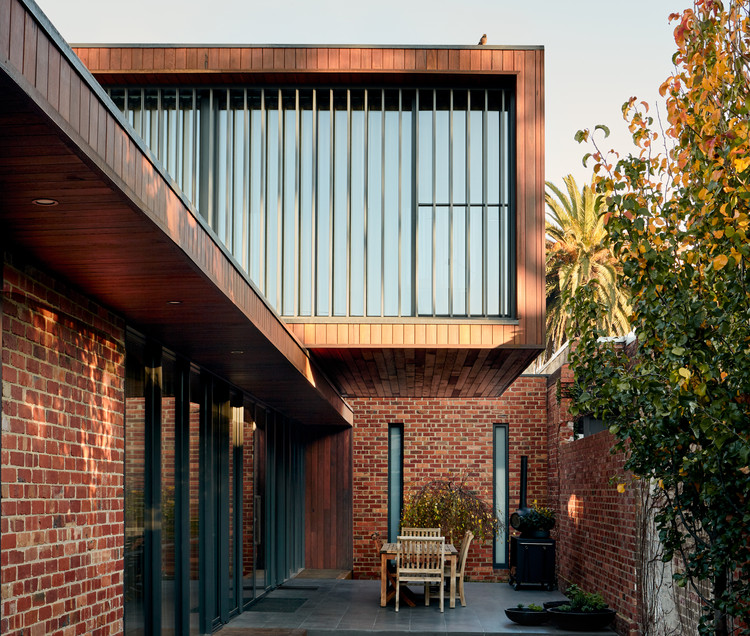 Text description provided by the architects. The Kelly family have a passion for cooking that few families do. Their interest is so great that they frequently try to decipher the ingredients of dishes in their favorite restaurants and later reinvent them at home. They also have a respect for heritage and sustainable design that along with their culinary passion became the foundation for the design of their new home.

Carlton is one of the oldest neighborhoods in Melbourne. It was established in 1851 to the North-East of the city when the Gold Rush began in Australia. The housing typology is primarily brick Victorian-style townhouses, with the vast majority of the plots being narrow and elongated, accessible from both the front and the rear by narrow laneways. Carlton is also the epicenter of Italian cuisine and community within the city of Melbourne.

The Kelly’s bought two of these Victorian townhouses in Carlton with a plan to combine the two lots, demolish the additions built in the 1950's and 1970's, restore the original heritage streetfront, and add a new addition to the rear. An important aspect of the architectural project was to maintain the 'layers' of history that had made their mark over the decades on the property whilst also moulding the house around Michael and Angela's culinary passion.

The house runs from West to East but in order to maximise the play of light within the space the design was divided into northern and southern zones. The new volume of the extension is located in the southern zone, overlooking a garden to the north to ensure that the low winter sun has access to the interior of the house. The house is divided into old and new with the front of the house restored to its original heritage style. The first floor addition at the back of the property twists to run north-south instead of east-west and overhangs the garden to form a shaded courtyard. To maintain the conceptual foundation of the design this twist has its central axis in the kitchen space.

With a dedication to the philosophy of sustainable development, all the bricks from the buildings that were demolished were recovered, cleaned and organized by hand by the Kelly’s, to be recycled and reused in the new construction. Despite having to demolish part of the northern house to make room for a garden, the perimeter walls at the edge of the site were deliberately kept free from any major modifications. Those walls defined the history of the house, different renovations over time represented in the layers of bricks in a wall. Along with this, the new construction highlights the recycled bricks as a show of respect to the house's historical value.

The Kellys maintain a very active social life, one that extends to their neighbours and so it became important that the garden open directly onto the back laneway becoming an extension of the streetscape. This sense of community, food and respect for history permeates the home and provides a rich space for its inhabitants.