Save
A Greenhouse City on Mars and a Dockside Tower in Dublin: 8 Unbuilt Projects Submitted by our Readers
Share
Or
Copy

Architecture is defined by its context. This holds especially true when buildings are located in harsh climates and must respond to natural conditions. This week’s curated selection of the Best Unbuilt Architecture focuses on designs located at the intersection of nature and the built environment. Drawn from all over the world, they represent proposals submitted by our readers.

The article features a range of building types and locations, including many coastal proposals, from a regeneration plan on the South Coast of England and a proposal to link the famous Turku archipelago, to a dockside timber tower in Dublin. Also included are more extreme ideas, from an overlook on the Algarve coast to a vertical city with greenhouses located along a cliff on Mars.

Read on to discover 8 selected projects highlighting conceptual ideas for living on the fringe and with nature, along with their project descriptions from the architects.

This proposal is a design of a self-sufficient and sustainable city on Mars for one million humans. The project is called Nüwa and is part of an exhaustive scientific work for a competition organized by The Mars Society, and fully developed by the SONet network, an international team of scientists and academics. Nüwa is a vertical city located on the slope of one of the Martian cliffs, protected from radiation and meteorites while having access to indirect sunlight.

The design team has secured planning permission from Adur and Worthing Councils on the redevelopment of Brooklands Park on the South Coast of England. As a catalyst for regeneration, the design aims to transform the park into a science and discovery hub. This project follows the practice’s latest proposal of pop-up tents to support outdoor learning in local communities and enable social distancing compliance as schools reopen.

Three Pieces of Turku is a winning competition entry for Linnanniemi port area surrounding one of the oldest Northern European medieval castles, passenger ferry terminal and Maritime museum. The idea is to distinguish three characters of the area as the three pieces interlocked together creating a missing link between the city and the famous Turku archipelago – Harbour City, Castle Park and Maritime neighborhood.

The Überseestadt in Bremen is one of Europe’s largest urban development projects, with 300 hectares of land and one of its outstanding port regeneration projects. Within the area there is the peninsula Überseeinsel“ bordered by the Europahafen to the north-east, the River Weser to the south-west and the former Kellogg operating area to the south-east. The architecture itself has become part of the scenery. The conversion of the buildings by DMAA, including the silos into a hotel and the Reishalle into a market, enables a unique experience on the Weser.

Dock Mill draws inspiration from timber’s natural qualities, envisaging a sustainable project that preserves nature both conceptually and materially. Maximizing vertical space, Urban Agency's design would become one of the tallest timber buildings in Europe, just behind Moja Tower, in Norway with 18 floors therefore setting a precedent for future projects on a national and global scale. Naturally lightweight, the use of timber allows for easier transportation and enables prefabrication of the architectural structure off-site, therefore reducing the local disruption and high carbon footprint typically associated with building construction.

The Taikang Gui-Garden Elderly Care Community Center was designed by Sunlay Fangwei to explore the integration experience of architecture, natural environment, and humanistic approach. The architecture is a traditional Chinese ink painting scroll drawn by continuous eaves under which senior residents can feel the mountain and water landscape during rainy season in the South.

Architects Rudanko + Kankkunen won the competition to design a new wooden main building for Helsinki university's Hyytiälä forestry field station. The well-known research station is a retreat for scientific fieldwork in Central Finland. The new building will serve as an international living lab for wooden architecture. Researchers will monitor the performance of the wooden structures, indoor conditions and surface materials and their effect on the well-being and learning of visitors. The lifespan of the building is set to 150 years.

Anchored on the edge of a cliff on the Algarve coast, the mirador faces the immensity of the Atlantic ocean. The position on the site provides a privileged view of the surroundings, situated in the direction parallel to the ruins, seeks to establish a dialogue between intervention and context. The program is solved in a single piece, which can be read as a mono-material structure designed by Luiz Eduardo Lupatini. The search for harmony between opposites, and the balance between architecture and nature, creates a place of memory and contemplation, lengthens a way to be taken, where the only sound is the noise of the sea. 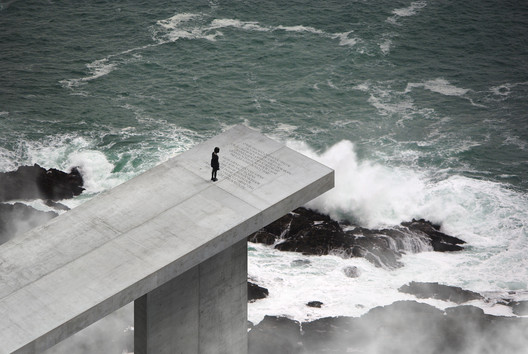