Save
Wooden Slat Facades: Rhythm and Translucency
Share
Or
Copy

When designing the Nordic Pavilion in Venice, Sverre Fehn incorporated Nordic architectural elements in unusual ways. One of the most attention-grabbing elements of the building is its laminar roof cover of white concrete, which is broken by trees planted inside the building blocking the sun's rays and filtering the light. Depending on the angle, the roof blades allow visitors to see the colors of the sky and the canopy of the trees, bringing dynamism to the pavilion's lighting and movement. In fact, the use of parallel slats on facades, walls, and roofs is a tradition that comes from Nordic architecture and has spread throughout the world. In this article we will cover some examples that use this element, including its variety of possibilities and the best ways to amplify their effect.

The wooden slats or lamellas generally act as a second layer of the facade, an external cladding that can be both functional and aesthetic. The various possible arrangements of the wood add warmth, coziness, and sophistication to the building, creating rhythm, forming aesthetic volumes, and covering both opaque and transparent parts of the building.

Usually, these slats are quite simple to install. On a masonry structure or some other type of wall, the wooden pieces are screwed on over the skeleton in regular intervals, with square or rectangular cross sections. The spacing and direction of the slats can be adjusted according to the drawing.

For example, in the project Sparkasse Bank by Dietger Wissounig Architekten, the institution's objective was to create a relaxed and friendly environment for customers and employees. The wooden veneer facade surrounds the entire building, variously punctuated by windows and other framed openings, providing privacy, lightness, and transparency.

Moreover, these slats can cover roofs in addition to facades. In the 11 x 11 House by Titus Bernhard Architekten, the external walls and wooden cover produced by prefabricated elements are overlaid by a vertical wooden lamella facade converging at the top of the roof. Varying intervals between the slats give dynamism to the facade.

In the KÜHNLEIN Architektur project, two gabled volumes are unified by the covering of wooden slats: one containing living areas and the other a series of bedrooms. In this case, the facade is made of untreated larch wood, and over time will become grayed out.

Using wood slat coverings can be a good means of renovation and revitalization. In one example in the Czech Republic, the architects at Kamil Mrva used the solution to make the building appear more contemporary. Covering most of the openings of the original structure with a prismatic volume of wood, the lamellar facade is made of common unfinished slats brought from a nearby sawmill.

In FELTO's project, Puinhuis, the original building was wrapped in a new envelope. The shape still conforms to that of the old building, but the vertical wooden slats and a series of square windows apparently arranged at random clearly mark its contemporaneity and uniqueness.

But natural wooden slats do not always need to be vertical with regular spacing. House in Tschengla, by Innauer-Matt Architekten, utilizes horizontal strips on a dark background to envelop the entirety of the gabled house's simple volume. Likewise, in this Snøhetta project, wooden slats are applied both horizontally and diagonally.

At Core Agora Shops, by Not a Number Architects, the translucent pavilion facades are made of plywood lamellas in a woven pattern that reflects traditional basketry techniques. This wooden facade acts as the connecting motif of the entire complex, but also as a vertical sun protection device for all structures. The uniformity of the skin is interrupted by large windows that frame the products on display. At night, the volumes are lit up like lanterns that illuminate the paths surrounding the park.

In the project for a small weekend house in the Netherlands, the architects chose to cover the entire building with dark wooden slats. In this case, the underlying fixings, with the same finish, are nonetheless very apparent.

In the Fazenda Catuçaba project, Marcio Kogan and Lair Reis chose to cover the entire volume with wooden slats, but specifically with raw pieces, logs with organic shapes. This creates a unique pattern, especially with the shadows cast by the sunlight.

Through these examples it is possible to see the versatility and possibilities of this unique façade design element. In addition to providing an aesthetic that is simultaneously calm and dynamic, it plays with natural lighting and shadows, can help reduce excessive solar radiation, and enables ventilation. Find out more about the projects that use this solution in the gallery below and in this My ArchDaily folder. 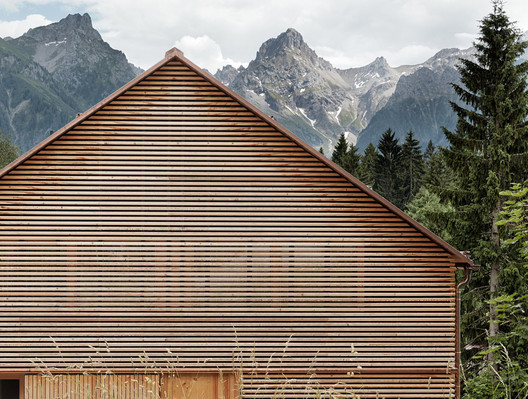