Coop Himmelb(l)au was founded by avant-guardists Wolf D. Prix, Helmut Swiczinsky, and Michael Holzer in Vienna, Austria. Their early work sought to create and utilize architecture as an experiment that would react to the human body. Through multiple installations, they were able to make architecture look inwards, towards individual users, but project that in a highly public way that showed how biofeedback could have the power to transform buildings as we know it.

In their Astroballon project, the team used medical equipment to record and amplify the user’s heartbeat, and then play that feedback to the user so that they could adjust their breathing rate and anxiety levels to enter a state of meditation and relaxation. Not only was the user relaxing, but this feeling was shared with passersby who would visually see the heartbeat through different light patterns. The relationship between the user, balloon, and onlookers created both an architectural and social solution.

Their experiments with the human body continued with their Face - Space Soul Flipper project in which facial expressions of a user are projected into a pillar in the form of a color. Bright colors represented a happy expression and sad expressions were projected in the form of cooler hues and tones. Their work in this formerly niche area of architecture has become extremely popular in the present day, with architects and designers understanding the importance of architecture that responds to the human body. Their pioneered experiments have transformed into modern technologies, clothing, and buildings that have learned to adapt and respond to the human condition.

Aside from responsive architecture, their projects also sought to engage users in a playful way, with City Soccer, or Stadtfussball. Four orange inflatable soccer balls measuring four meters tall were placed on city streets to encourage spontaneous play by literally kicking the balls around. More than ten thousand visitors “played” on the opening day, creating a huge success for the balls, even as they grew increasingly dirtier the more that they were kicked around. The support for the project re-introduced the notion that urbanism, and streets, in particular, should be used for play and a space for personal and collective liberation- an idea that urban planners still try to implement into city streets today.

Coop Himmelb(l)au’s international breakthrough was in the firm’s invitation to participate in the “Deconstructivist Architecture” exhibition at the Museum of Modern Art New York in 1988. Alongside Frank Gehry, Peter Eisenman, and Zaha Hadid, to name a few prominent architects, Coop Himmelb(l)au presented multiple projects that represented their subversion of modernist design. Their rooftop remodeling is a highly tense structure that takes on the shape of a large arthropod about to engulf the entire site. Their second project, the apartment building, displays an angled rectangular volume that peels away to reveal protruding beams, and the final project, a skyscraper in Hamburg, undermines the traditional skyscraper by presenting it as fragmented and irregular shape that gives the appearance that the tower might completely collapse.

The firm now continues to stay true to its early roots but translates these ideas into award-winning structures around the globe including the Musée des Confluences in Lyon, France, and the House of Music in Aalborg, Denmark- perhaps two of their best-known projects. Not only do these projects continue to influence architectural pedagogy, but it’s their initial experiments and learnings that have really helped to shape and transform the built environment as it relates to the human scale today. 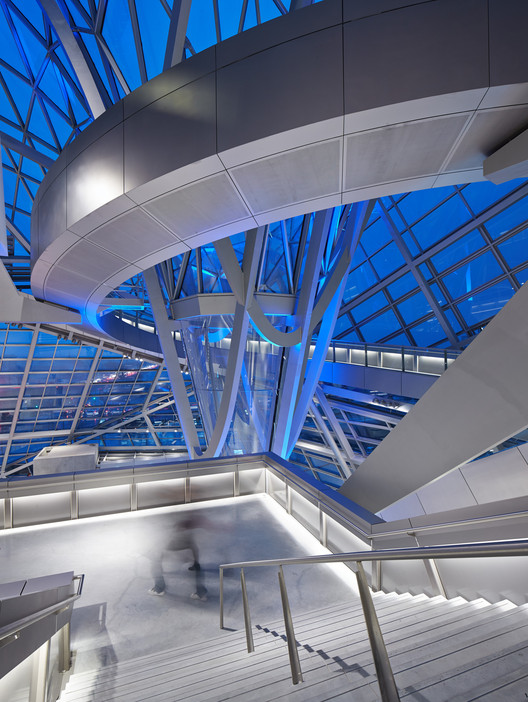