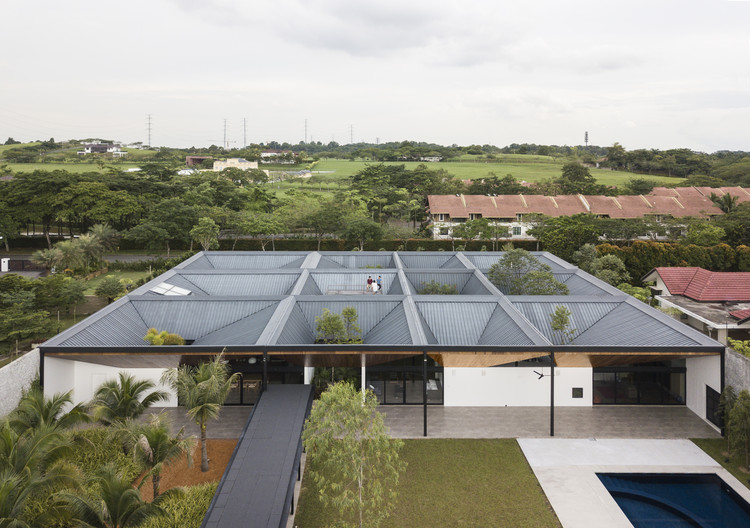 Reinterpreting the cloister as a space imbued with infinite permutations of possibilities, living occurs organically around courtyards.

The house is built for a client and his extended family who seeks a communal way of living but cherishes privacy and security in leisure farm estate, Johor Bahru. The family entertains frequently and needed the house to be generous when hosting huge parties and cozy with smaller affairs. Moving from Singapore, the family was exhilarated with the prospect of living off on an immensely large plot of land in the open countryside while deeply paranoia of the safety across the Straits.

Confronted with the context, we were gripped with the intuition to fortify and the preoccupation with flatness. Considering the size of the plot, it came to us almost immediately to build a single-storey mansion. Geoffrey Bawa’s house on 33rd Lane in Colombo and the House of the Faun in Pompeii (2nd century AC) were references that were instrumental in the formulation of the plan in the early stages.

From the street, the house looks understated, almost unapologetically flat, revealing little of the interior except for the faceted, sloping timber ceiling that hangs within. The 5m tall walls fortify the interior and encapsulate the roofs that slope inwards to the courtyards. Within the compound, the main bulk of the house, where communal living and entertaining occurs, is compacted over a third of the plot size, freeing up a vast expanse of space for a back garden, pool, and an annex block that houses the immediate family’s quarters.

The main space is spatially delineated into 9 sub-grids, punctuated with a series of courtyards. The courtyards were essential for the otherwise deep plan to work, as they bring natural daylight and ventilation to every part of the house. Each courtyard is unique, differentiated by the varied sizes and placement within its respective sub-zones. Each has a different garden that responds to the differing openness to the sky and the way rain gathers and free-fall into the courtyards from the varying roof slopes which are geometrically determined by the courtyards’ placement and dimension.

The living spaces are clustered, organically arranged, and rearranged over time, weaving freeing amongst the interspersed cloister. A dominant interior feature that characterizes the different, inter-connected cloistered spaces is the multi-faceted, Merbau timber ceiling that slopes from the high ridges towards the courtyards. At nightfall, fragments of these undulations are revealed through a glass strip of the façade, revealing the intricacy within.

We were exploring and expanding on the contemporary tropical house trope were courtyards and roofs, instead of walls and air-conditioning, dictate and define space. We wanted to create a house that can evolve organically with the family.  We were interested in spaces that inspire and sensitized one to the beauty of nature. Adapting their living spaces with the changing sun-path and taking notice that the sound of rain is distinct in the different courtyards. 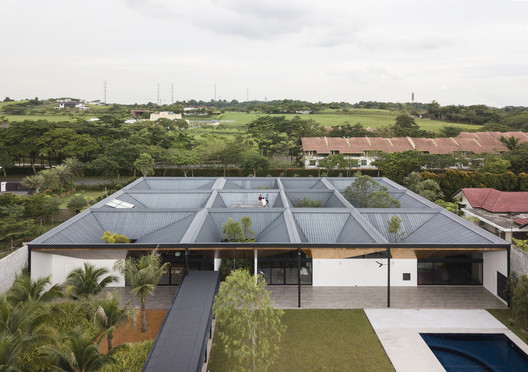