Read more
Save
Lightweight & Detachable Solutions: Buildings as a Reserve of Materials for the Future
This article is sponsored by:

At the 2016 Venice Architecture Biennale, curator Alejandro Aravena decided to reuse 100 tons of material discarded by the previous Art Biennale to create the new exhibition halls. Besides preserving 10,000 m² of plasterboard and 14 km of metallic structures, the initiative intended to give value, through design, to something that would otherwise be discarded as waste. The project also shed light on another observation: as architects, we generally restrict ourselves to thinking about buildings during the design process, construction phase, and at most through the use phase. We hardly think of what will become of them when they are demolished at the end of their useful life, an issue that should urgently become part of the conversation.

It is already well known that the construction industry has had a significant impact on the planet by using extensive natural resources, water, and energy for the execution and maintenance of projects throughout their life cycle. According to The Circularity Gap 2019 report [1], the construction sector accounts for almost 50% of materials used globally (42.4 billion tons). It is also one of the largest generators of waste, much of which is difficult to reuse or recycle. To make matters worse, construction materials are generally disposed of in a haphazard manner, rendering them useless for later use in civil construction.

The linear model (extraction - manufacture - use - disposal) typically followed by the construction industry generates substantial negative impacts and irreversible consequences for the planet. An alternative to this model is the so-called circular economy, which is inspired by natural ecosystems wherein processes and work-flows create cycles of resorption and recycling, finding ways of returning to nature with little negative environmental impact. According to this reasoning, when a material no longer serves its pre-established use, it can be repaired, reused, or recycled, allowing resources to be reused almost indefinitely while circulating in safe and healthy economies for both human beings and for nature.

In theory this method seems quite simple. But how do we recycle buildings that have fulfilled their useful life in practice? If a building cannot be reconfigured for adaptive reuse, how can we transform its materials to give them new life through initiatives that help reduce the number of obsolete materials accumulated in landfills? The concept of urban mining offers an interesting approach. In cities which have a huge stock of built structures, a large portion of the raw materials are no longer located at their original source, but in new anthropogenic repositories (i.e. buildings). In other words, cities can be considered immense repositories of products and raw materials.

Another interesting concept is the movement called Design for Deconstruction (DfD), started in the 1990's. By definition, DfD calls for buildings to facilitate future dismantling (partial or total) in order to recover systems, components, and materials, thus guaranteeing that the building can be recycled as efficiently as possible at the end of its life cycle. The strategy is based on a growing recognition of the fact that most of the built environment has a limited lifespan and that each building represents a deposit of resources which, instead of ending up in a landfill, must find its way back to the "reduce, reuse, recycle" loop. Thus, DfD involves understanding the complete life cycle of a structure and predicting the reuse of its parts, thus reducing resource consumption and pollution.

In practice, instead of demolition, we should think about dismantling. This method involves a careful deconstruction of the building's components, which can be repaired or reused in other buildings or directed for recycling. To make the process more efficient and successful, it is important that the different materials can be separated from each other. Easily separable structures and construction products are at the heart of a high quality recycling process. According to Annette Hillebrandt [2], structures joined by detachable connections that can be dismantled quickly and economically are viable alternatives to the glued joints and composite joint structures that are widely used today. They allow for the recovery of materials without the adhesion of other substances, which is essential for effective recycling. Detachable connections also facilitate repairs while the building is being actively used, making them more resilient and sustainable.

But without technological contributions from the construction and manufacturing industries, designers end up with their hands tied, using materials that do not allow for easy disassembly and recycling. Saint-Gobain Weber noted dissatisfaction with the lack of recyclability of composite thermal insulation systems, which end up being mixed together. The company developed a solution that is the first system made of removable and fully recyclable thermal insulation. A specially developed separation fabric embedded in the base plaster, as well as the absence of glue, ensures that it can be completely disassembled and separated. Throughout its lifespan, the weber.therm circle meets the same durability and safety requirements as any other thermal insulation composite system approved by construction authorities. Due to its structure, it allows for the recycling of components and facilitates easy conversions, paving the way for the inclusion of future technological advances. After reaching the end of their useful life, the components are used to create new, high-quality products. The system has even received the Federal Ecodesign Award, the largest state ecological design award in Germany.

But there are also other materials that provide possibilities for reuse and recycling. Ventilated facades, for example, offer dry assembly and disassembly, allowing their parts to be easily detachable.

For thermo-acoustic insulation there are many interesting options. Saint-Gobain's ISOVER offers several possibilities for thermal and acoustic insulation in walls, ceilings, and floors, which can be easily recycled. This includes products such as Isofacade, Politherm, Kontur, and others, each suitable for different construction systems and available in certain locations. The company develops waste management schemes to properly collect, separate, and process end-of-life waste to form new glass wool insulation or to manufacture other useful products, such as bricks.

Gypsum boards used in internal and external walls, such as Glasroc® X, are completely recyclable after the end of the building's life cycle. Gypsum, specifically, is a material with high potential for recyclability. By recycling the gypsum waste, it is possible to generate a raw material that can replace the raw material of virgin gypsum in the manufacture of new products.

Other products and solutions make construction lighter and easier, in addition to allowing easier disassembly. CLIMAVER is a self-supporting duct for air conditioning, ventilation, and heating systems, which reduces the weight per square meter by more than 3 times (from more than 6 kg/m² to 2 kg/m²) in comparison to traditional metal ducts surrounded by insulators. They are produced with up to 60% recycled material, 100% for glass, and are perfectly reusable in other buildings if they are mechanically intact.

Designing buildings to support adaptation, disassembly, and reuse can reduce waste and extend the useful life of a building's constituent materials, providing economic and environmental benefits for builders, owners, occupants, and communities. By designing with this circular economy in mind, those responsible will have control over most of the process and will be able to make decisions to reduce environmental impact, conserve resources, and reduce costs. This methodology involves everything from thinking about removable and detachable joints to specifying recyclable and sustainable materials in all stages. To be truly sustainable, the architecture of the future must not be expected to last forever. 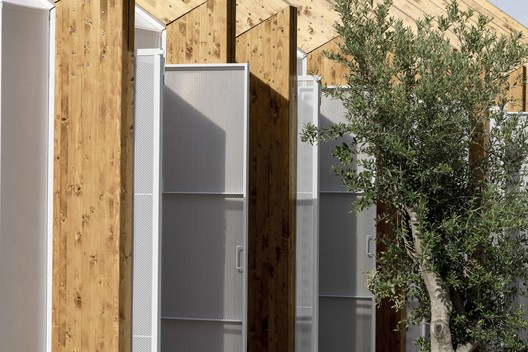