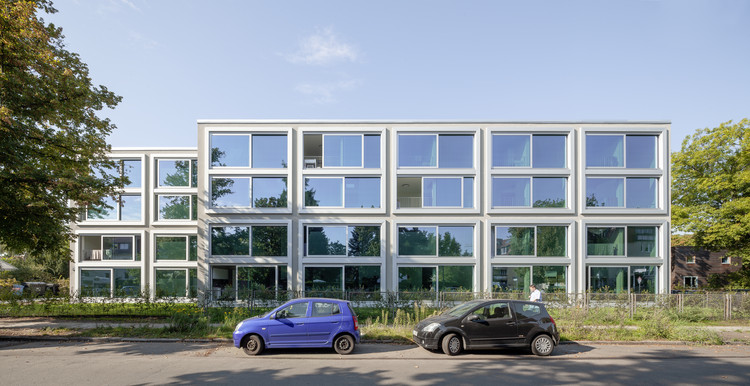 Text description provided by the architects. Pankow-Niederschönhausen is a neighbourhood in Berlin characterised by an open urban structure, large and green private gardens, and streets planted with big powerful trees. The originally intended closed and dense urban blocks haven‘t been achieved in the entire area over time, but are still to be found on its edges. Instead, the neighbourhood is dominated by an informal development of urban villas, semi-detached, and single-family houses which could be described as “urban suburb”. Embassies of many countries were erected there during the GDR era, which resulted in a delicate balance between residential and public functions. The former embassies, designed in a late modern style, stand all on spacious plots of land with park-like gardens. The embassy buildings in Pankow were no longer needed after the German reunification and as a result, remained empty.

The Bard College Berlin, a German-American university for humanities and social sciences originating from Annandale (state of New York), has been running since 2003 its Berlin branch within this urban planning context. After the reunification of Germany, the college did not set up a separate campus for this purpose but acquired a number of the empty embassy buildings and assimilated of the residential buildings existing context. Due to the relatively small available buildings, this integrative approach in the urban area appears at first glance somewhat impractical.

Nevertheless, the situation with small distances between the buildings allows a good reorganisation. Similar to how it used to be with the embassies, the activities of the students are gradually being incorporated within the neighbourhood. The College blends in the open urban structure as well as in the population of Berlin Pankow and creates as such a new campus model. The new Henry Koerner Hall building follows this logic of slow blending and connects with its size to the surrounding loose development. The building has for this purpose a graduated volumetric in order not to be perceived as a whole in its full length. Its modernist architecture tries deliberately to connect with the architecture of the former GDR embassies. The architecture of housing is combined with a facade along the street that deliberately breaks through the somewhat mundane and informal context of the area, as well as underlines the open character of the College.

The canteen of the Bard College is situated in a former embassy building, south of the Hall. Both buildings form an ensemble. These two properties are strongly connected to each other, creating in their midst an attractive small park, which can be used by the residents for picnics, learning groups and any other outside activities.

Student apartments as maisonettes.  The question is always with flats: how to give each apartment an individual and distinctive character. Maisonettes with two-storeys high void spaces are extremely suitable for that, as they give the residents a feeling of living in a single-family house. The question of which size is sensible for a residential unit rises always with students' housing. How big should be the group of students living together in order to create a sense of community and responsibility towards the shared spaces such as the kitchen and bathrooms?

An important topic in the case of Henry Koerner Hall is the flexibility and transformability of the building in the long term. Bard College finds it important that the flats can be used by families or been sold as such eventually. The size of the residential units of the Henry Koerner Hall has been determined by the fact that they’re conceived as maisonettes meant for up to six students each. In the long main bar, all apartments have a spacious two-storeys high void space. Every two apartments are stacked on top of each other. The lower ones are directly accessible from outside through a path on the back of the property, whereas the upper ones can be reached by a gallery also situated at the back. This combination creates a typological variation: you enter the lower flats directly from outside stepping in the living room and reach the bedrooms on the first floor via inside stairs. In the upper maisonettes, you get in on the top floor and reach the living room downstairs through the internal staircase.

In both cases, the two-storeys high void spaces can be seen from the staircase which is visually connected to the living room, creating a strong spatial identity with powerful sightlines. All living rooms have an open kitchen. In the smaller volumes, set back at the rear, you will find one apartment on each lower floor and a large maisonette flat on the two upper floors without two-storeys high void space.  The large windows expand the interiors greatly visually and give them an expansive space that reflects positively on the small student rooms. On top of that, the glorious trees which stand both on the front and the backside of the building, are framed by the large windows and become part of the interior. 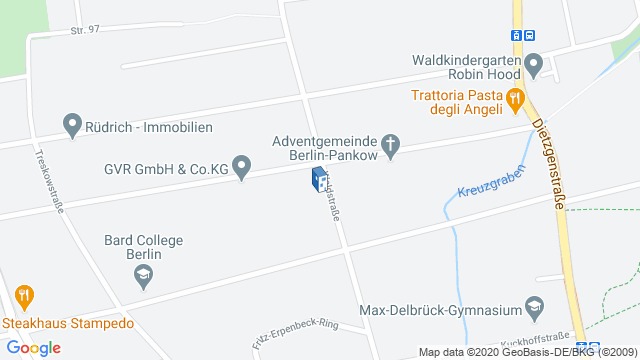 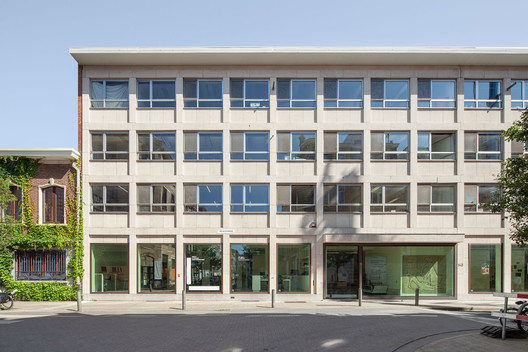 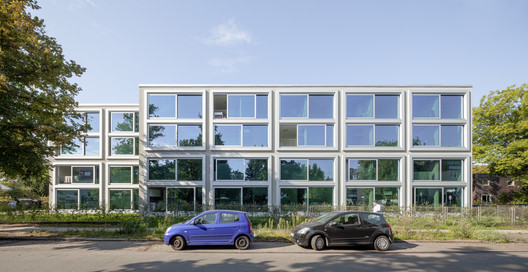