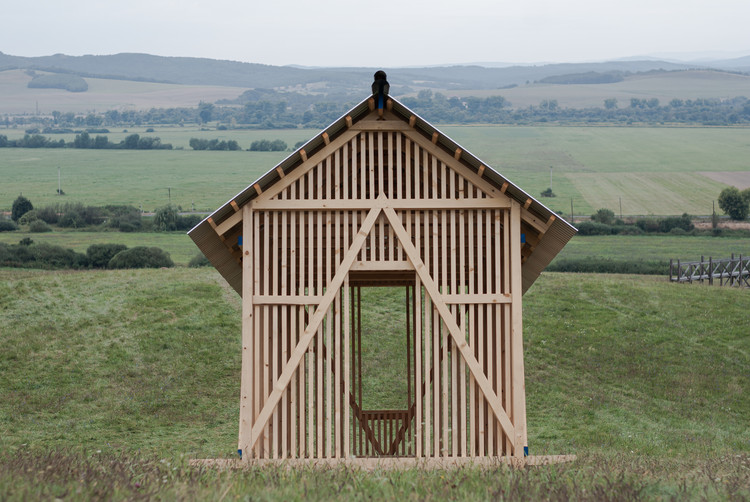 Text description provided by the architects. Paradigma Ariadné is an architectural studio independent of styles and trends, where the architectural product always contextualizes in some way. Usually, this contextualization creates the extra content which makes our studio’s plans unique, be it a house, furniture, or urban planning. The Slanted House connected to this very characteristics of our studio to both, as its statement and its connection to the landscape are apparent in a way that at the same time it also tries to refer to and interpret its theoretical context: critical regionalism.

Kenneth Frampton’s 1983 essay, ‘Towards a Critical Regionalism: Six Points for an Architecture of Resistance’, published in the architectural periodical of Yale University, Perspecta, stood sharply against the universality characterising the late modern permeating architecture at the time, and the post-modern's response to it. After 40 years some things are still valid relating to critical regionalism even without the historical context: the acceptance of the features of the land and the landscape, acclaiming the tectonic logic inherent in the structure, and consequently.

The close connection among the building's visual appearance, structure and building material. The concept of the Slanted House poses one question to this critical regionalist interpretation framework: Can a house respect the landscape by domesticizing it? Human existence has intertwined with horizontality. Even if a house looks slanted from the outside, in the inside it consists entirely, or partly, with the help of smaller or larger stairs, of horizontal surfaces so that it can be possible to sit, sleep and work in the house.

This is the domestication that buildings born in the light of critical regionalism themselves could not leave behind. In contrast, in the Slanted House, the landscape dominates totally, both the structure of the house and man at the same time, regardless of whether a particular person is the builder or user of the house, thus, with this, the building also joins the non-human-centered approaches that permeate contemporary philosophical debates. However, if we interpret Kenneth Frampton strictly, it is not really possible to decide whether the Slanted House could be part of the architecture he prioritises or not. Because of the logical connection elaborated above, its slant creates a connection to the landscape with naive sensitivity, while upon entry it gives visitors a pleasure that makes them smile, which could also stem from the hidden irony that takes the landscape extremely seriously.

And if something was distinctly away from Frampton's Marxist, resistant interpretation of landscape, it was irony. The Slanted House is thus a building encouraging dispute, which allows many entry thresholds for the visitors and interpreters of the house. It can be a liberating playground for children, which does not need to be capable of anything else than providing a space which one can enthusiastically run across, leaving themselves to the forces of gravity, and at the same time it can be a manifestation of that particular 1983 Perspecta publication, stirring up a dispute. At Paradigma Ariadné, we believe that the latter approach is the key to an architecture that provides everyday experiences. Slanted House was designed and build to 100 Sparks Artweek with the financial support of Visegrad Fund