Real estate development firm ELAD Canada has unveiled Galleria III, Toronto’s tallest flatiron building designed by Hariri Pontarini Architects and DesignAgency. Made to be a gateway to Galleria on the Park, the development will include 426 residences ranging from studios to three-bedroom units. The tower will part of the next phase in the master-planned community and the transformation of Toronto’s West End. 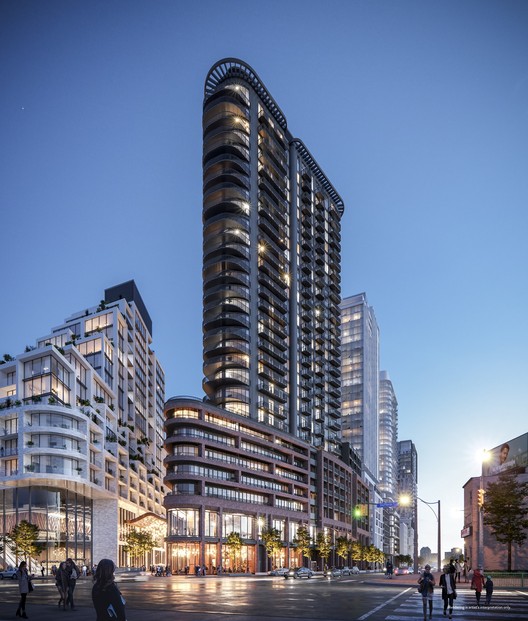 The 31-story Galleria III will feature a deep red brick exterior along its podium. The mixed-use tower is made to mark the entryway into the 20-acre site at Dufferin and Dupont, and the flatiron design aims to pays homage to the area’s industrial heritage. Hariri Pontarini Architects (HPA) specifically selected this block because of its unique shape. Two floors of retail at grade will offer food, beverage, and personal services. HPA is also behind the design of the overall Galleria on the Park masterplan.

“We wanted to work on this influential tower so we could both build on the existing character of the neighbourhood and look to the future, setting the tone for the continued evolution of the West End,” says David Pontarini, Founding Partner at Hariri Pontarini Architects. "The result is a sophisticated design, unlike anywhere in the city, which emphasizes the pedestrian experience to define a new chapter for Dupont St.”

The project interiors were created by DesignAgency and feature finishes that include leather and wood. Inside the suites, residents will be given the option to choose between three bespoke palettes: light and bright, high contrast, or tone on tone. Construction for the first phase of the eight-building Galleria on the Park development began in August 2020, and upon full buildout, Galleria on the Park will include almost 2,900 condominium residences and 300,000 square feet of retail space in the West End neighborhood.