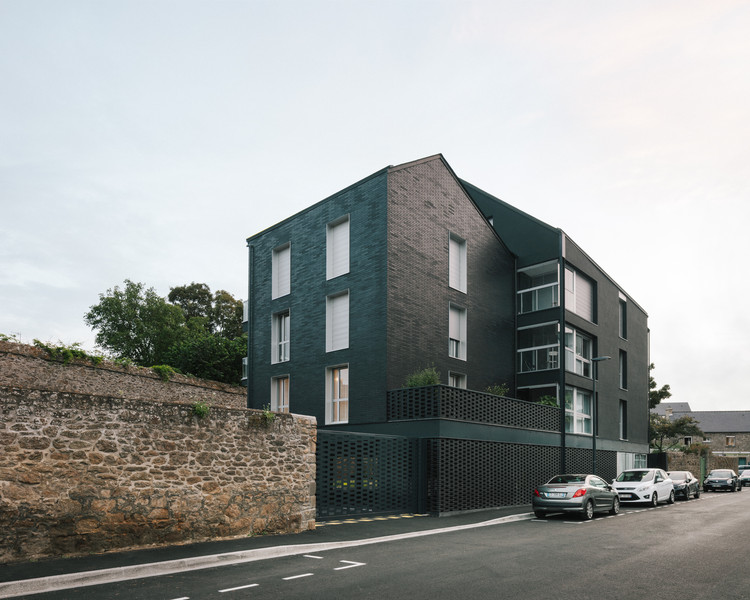 Text description provided by the architects. On the border between Saint-Servan and the Bouvet basin of the port of Saint-Malo, the project should connect two environments : one urban, the other port. This small, sober and discreet architecture is an important part of the port identity of this changing district. Inspired by the image of the docks of yesteryear, it frees itself from them to play with skewed lines and offer chiseled volumes, precious and contemporary prisms.

Taking up the general alignment of the street as well as that of the surrounding fabric, the building is set up at the property line overlooking rue Lecoufle. This layout creates access to the north for vehicles and pedestrians and offers a volumetric reading of three houses of similar proportions, playing on a variable direction of the building. The building is compact but, regulated by means of a volumetric triptych, allows an optimization of heat losses for an optimized management of the building's performance.

The materiality plays on matt and gloss, smooth and rough. Subtle reflections emerge from them for an optimal light intake that varies the perception of the project throughout the day according to the course of the sun. The malouine light, so particular, sometimes raw, sometimes muffled, clings to the walls of the project and underlines its contextuality. The sun after the rain sometimes detaches the building from its mostly stone backdrop. The location of the project is strategic: just a few steps from intramurals, the Bas Sablons beach and the Bouvet and Vauban basins. In our search for a contemporary architecture, a re-reading and interpretation of the premises requires respect for the urban context of Saint-Malo, its signs and its specific implementation in the district.

Onyx incarnates a contemporary Malouin architecture, contextual, borrowing from the vernacular. We wanted to work on the durability, on the fine inscription of the building and its evolution over the years. We had to avoid the mistakes of the past of talkative constructions in favor of a sober elegance that knows how to inscribe the project in the long term. The building is therefore part of a delicate but powerful heritage fabric by its minerality. It reinforces the rhythm of neighboring buildings to better highlight them in order to preserve its referent character. It also respects the urban and architectural prescriptions of the Architect of the Buildings of France.

Generally speaking, the aim is to build on the heritage dimension of the site, to implement an urban ensemble that allows the development of a relationship between the different contexts constituted by the existing built and landscaped environment, and to create coherence with the maritime façades of the Quays of Val and Trichet, which today distinguish the port façade. Finally, the regular topography of the site makes it possible to create a peaceful garden in the heart of the islet as a continuity of landscaped parking lots.

At the edge of the plot, the choice was made to clear the existing walls of any parasitic elements to reveal their materiality and historical thickness. In contrast, there is a respectful exchange between old and contemporary, between the old and the new. A special relationship is thus established between the very urban district and the largely green island heart. It is created visually by creating a large porosity from the street through a moucharabieh that takes up the pattern of the bricks on the façades. 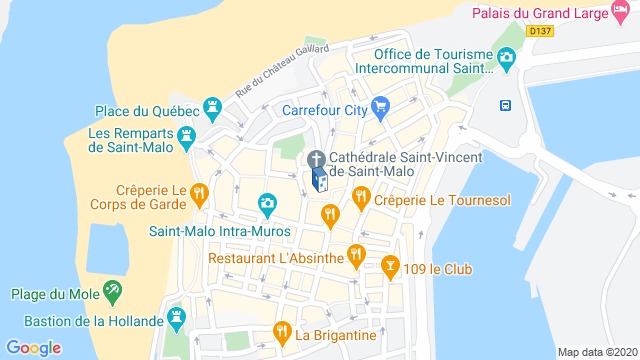