Dominique Perrault Architecture has won the competition to design the new retractable roofing of the Suzanne Lenglen Tennis Court. Bringing additional value to the “French Open” site, the “architectural intervention not only creates a roof but also proposes a large-scale architectural ensemble whose silhouette dialogues both with the surrounding landscape and the architecture of the existing building”. 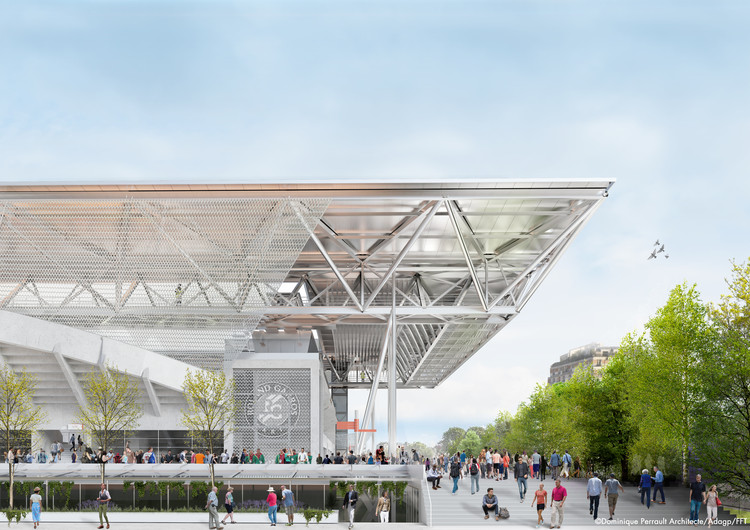 In line with the recent work done with the retractable roofing of the Philippe Chatrier court and the construction of the new Simone Mathieu court, on the Roland Garros tournament site, the new roofing on the Suzanne Lenglen court aims to fit into this context. Proposing a large-scale architectural ensemble, not only a retractable covering, Dominique Perrault imagined a floating roof above the court.

“The intervention preserves the integrity of the existing volume by defining a U-shaped pure and technical structure, open to the peaks of the Bois de Boulogne”. Comprising a mobile part, made of canvas, and a fixed part that provides support and integrates all the necessary equipment, the cover rapidly folds and unfolds. By creating a dialogue between a new flat horizontal surface and the existing curves of the side stands, the project enhances the geometry of the Suzanne Lenglen Court.

Consisting of a set of technical solutions adapted to specific challenges, the proposed roof is overhanging the existing stands, with sufficient overlap.  Covering the stands on three sides, the two east and west arms of the U, with a span of 87 meters, integrate the rails and locking mechanisms of the movable roof, while the South section forms a storage box for the folded roof and integrates the winch and the motor for the activation of the unfolding mechanism, thanks to a moving button. Moreover, “the constructive system of the steel structure is mainly based on the bolted assembly. Laterally, a mesh fabric, fixed at the top to the longitudinal beams and at the bottom to the existing concrete stands, encloses the bleachers”.

The mobile cover of the Suzanne Lenglen court thought as a pleated fabric, unfolds with delicacy and lightness in a solid frame. The mobile roof, like a membrane, is made up of a succession of 21 modules of stretched V-shaped canvas, continuously fixed between cables. Each module is approximately 5 meters wide and 44 meters long. The proposed fabric is a PTFE fiber fabric, that showcases “high light transmission, low maintenance, robustness under repeated folding and unfolding movements, preservation of its mechanical qualities in cold weather, and a much longer life span than conventional fabrics”.

Opening up towards the peaks of the Bois de Boulogne in the north, and towards an urban surrounding to the south, the Suzanne Lenglen court forms the main facade of the Roland Garros site. Located in the central walking axis, the project presented also an opportunity to improve the quality of the existing public spaces, in particular the forecourt to the south of the court. In fact, “once the court is covered, the square forms a sheltered place ready to be activated and animated during sports events”. 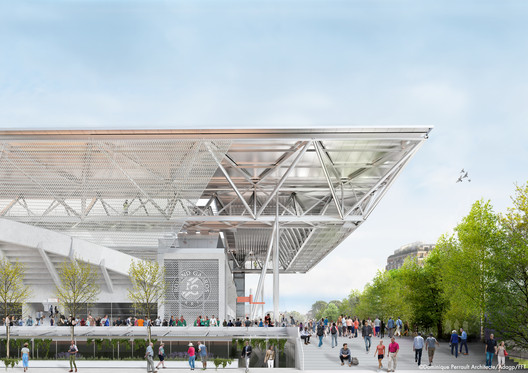