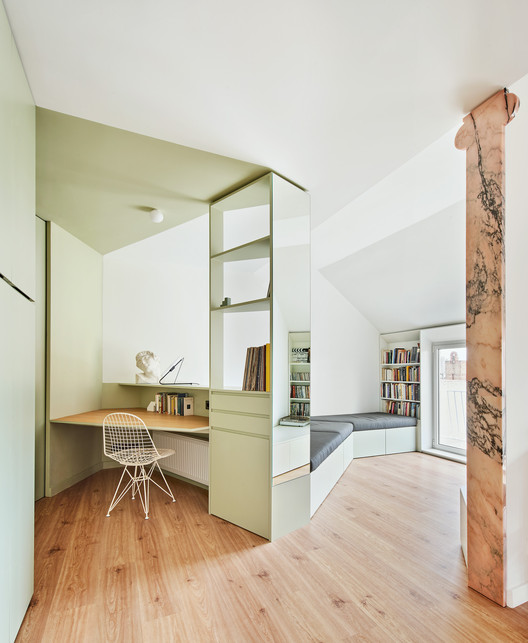 Text description provided by the architects. The house is located on the top floor of a building built in 1959 in the Gracia neighborhood of Barcelona. The building has 2 doors per landing, although both the attic floor and the top floor have only 1 door.

From the beginning, the project plans to reverse the distribution of the house’s uses. All the partitions are demolished, and given the refusal of the Community of Owners, any structural intervention is avoided, unlike the initial proposals approved by the City Council. The proposal is clear according to the client’s demands: a large room with a fully open bathroom and dressing room and a large common area to work and welcome guests without any constraints.

The unusual envelope of the building, with a continuous 1.65cm high façade and an accompanying sloping skirt (reflection of the roof), together with the access core and the load-bearing wall, leads to solve the program through custom-made furniture that adapts spaces in an ambivalent and even ambiguous way. Sofas that are beds turn into desks; beds that are wardrobes turn into bathtubs. And as a representation of this fluidity of uses, the apartment, beyond the obligatory access door, only has one door: that of the courtesy bathroom, for the guests’ convenience.

In parallel, the SE façade – the longest one –, is solved with a cladded shelf to increase the insulation of the façade and, running from side to side, it collects and singles out all the windows (originally of little importance), resulting in a homogenizing element.

As a last detail, a pink marble Ionic pilaster on the head of the load-bearing wall that was not allowed to be demolished, symbolically reinforces it, underpinning the general calmness of the Community. 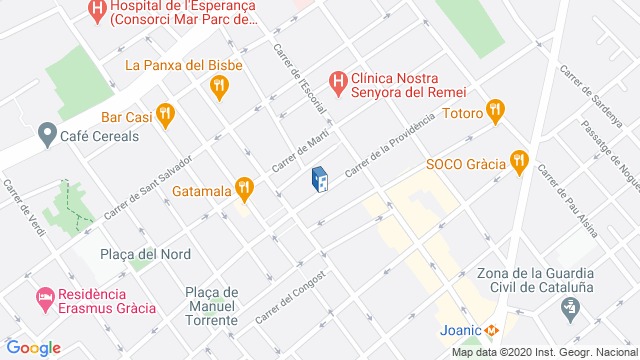 Location to be used only as a reference. It could indicate city/country but not exact address.
Share
Or
Copy
About this office
AMOO
Office
•••