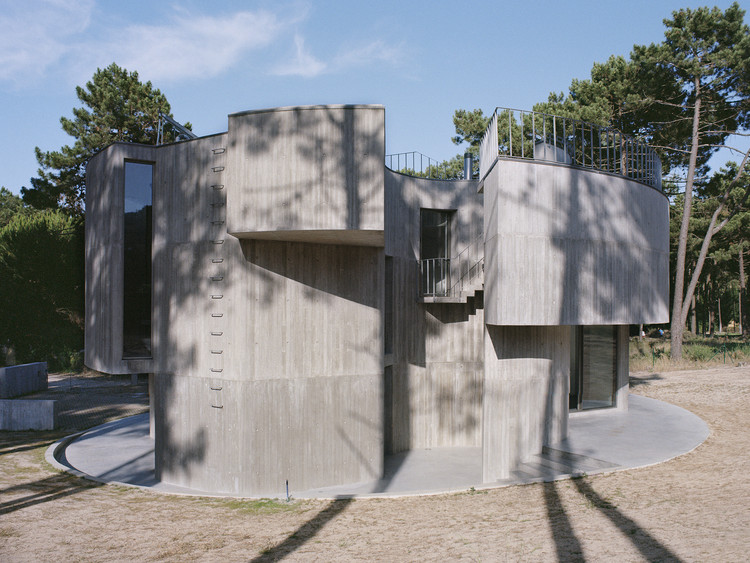 A house for the sun. ‘Casa Trevo’ or ‘Trefoil House’ is a two-storey residence, located south of Lisbon, Portugal. The site’s close proximity to the Atlantic Ocean provides pleasant breezes and plenty of sunshine, across all seasons. The project sits in a forest of pine trees, rising tall above a sandy terrain.

Inside, the rooms are organized around three outdoor patios, circular in shape. They function as extensions of the interior spaces as well as being light wells and large openings for the living quarters below and sleeping rooms above.

The nine-meter high patios also perform as main structural voids in the form of three hollowed and semi-open columns. Together, they support a series of floor slabs ascending at different increments. They also hold a beam of water, serving as a lap pool on the rooftop and whose underbelly is pressing down on the spaces below.

The structure is made of cast-in-place concrete and plays off the ambiguity of mass and void and of inside and outside. It addresses the site by stepping the ground plane along its natural slope and by bringing that level difference inside. It is anchored into the ground firmly but irregularly around its perimeter vis-à-vis the terrain.

‘Casa Trevo’ exerts a peculiar sense of autonomy and monumentality, despite its small size. It is unified by concrete on the outside, subverting the perception of its scale, while serving as canvas for a dialogue between nature and architecture to be projected. It also exudes a solid impression of mass while revealing little of its inside. The house produces its own introverted world facing the sun, with private yet mutable spaces rendered intermittently by Lisbon’s brash light. 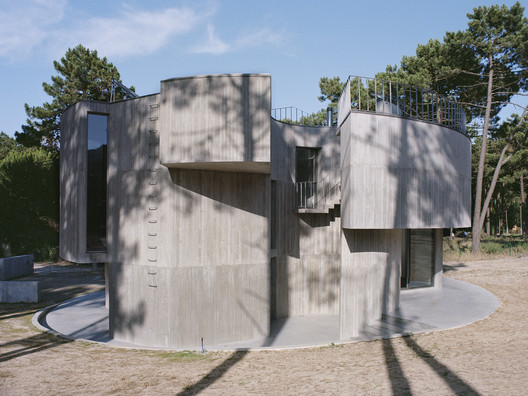