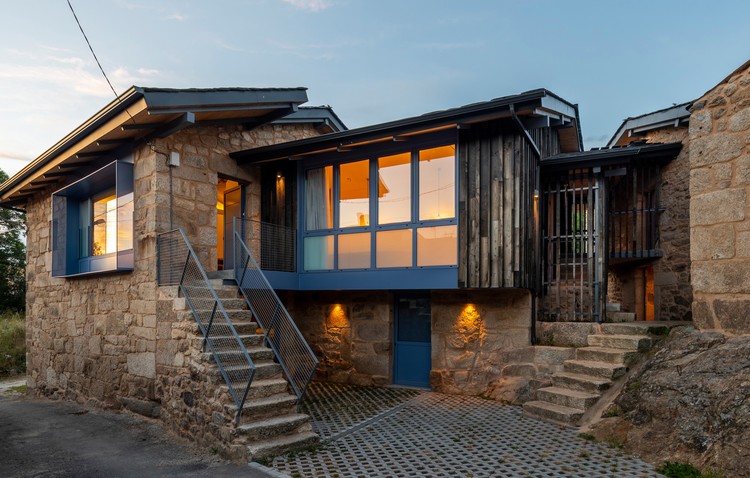 Text description provided by the architects. The rehabilitation comprises three contiguous buildings in the rural settlement of Castromao, belonging to Ourense province. The goal is to transform the old farmers’ houses, currently abandoned and strongly deteriorated, into a dwelling by annexing the three spaces that were originally independent. The area of the plot reaches a total of 150 m2 divided into ground and first floors.

The central section is attached to the western section on one side and connected through a wooden roofed footbridge on the other side. This solution allows direct connection between the three formerly independent sections, while also allowing north-south ground passage between the front and the backside of the plot.

The functional structure of the dwelling presents a clear distinction between the private uses on the first floor and the common use spaces on the ground floor. Accordingly, the first floor houses the bedroom and bathroom in the central and eastern parts, and the kitchen and living room in the western part.  This combined space of the kitchen and living room provides the perfect nexus between the private spaces on the first floor and the common-use space on the ground floor, which is connected through stairs connecting both floors. The lower floor consists of a cozy lounge that can house multiple uses thanks to its amplitude and versatile design. The functional program is completed with additional space on the ground floor of the central section, which may also house multiple uses such as laundry, drying, or storage room.

The first step in the rehabilitation process is to identify the singular elements of the building. Once detected, these elements are carefully restored and the whole design process is planned such that the intervention is coherent with the historical elements preserved.

Given this guiding principle, we preserve and enhance the stone walls present in the three sections of the building. We clean and grout both the inner and outer parts of the stone walls and respect their original distribution and structure, becoming therefore the axis around which our intervention revolves.

The western and central sections are jointly roofed with a continuous “flat” in the north side, and stepped one in the southern side to adapt the roof to the difference between both floors. On the other hand, the current double slope roof is preserved in the eastern section, since it is independent and differently titled from the other two.

The whole surface of the roof is tiled with black slates traditional from this area, which both provide homogeneity to the integrated building and coherence with the local cultural and natural environment.

The two main façades are a perfect reflection of the climatic conditions to which they are exposed. Whereas the northern façade is more opaque, uniform and with a few small openings, the south one is open with wide glassed galleries to make the most of the weather. 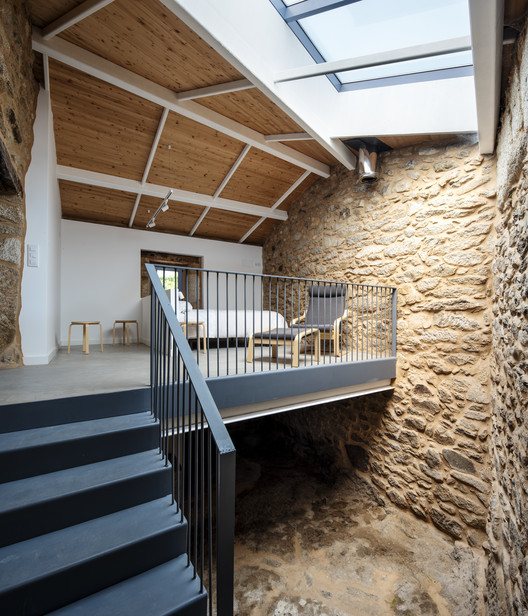