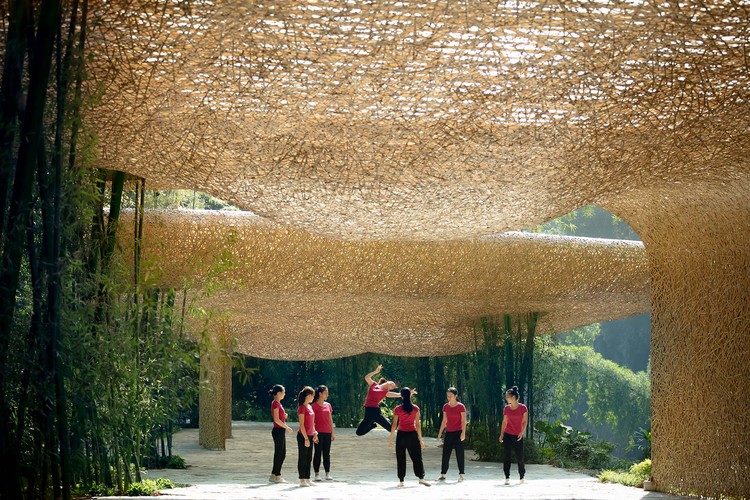 Text description provided by the architects. The Impression Sanjie Liu, Yangshuo, Guilin is located in one of the most dramatic landscapes in China. Endless greenery surrounds the site filling space between large karst towers of rock. With a landscape, so grand any moves to dismiss it, let alone compete would make little sense. With this understanding, it was decided that the natural elements themselves would form the premise for what architecture would inhabit the site, one element, in particular, bamboo.

The Impression Sanjie Liu is already well established, now in its 15th year of operation. The project presented a situation where most existing structures would remain untouched. Instead, the focus shifted to how introducing new interventions could support a pre-existing condition. At present, large clusters of bamboo cover most of the site, creating structures of mingling pipes and leaves. As a means to coincide with what is already there, the new architecture looked at borrowing the materiality of the bamboo, reconfiguring it to form new space. In doing so, this new space means not to contest. Instead, it aims to augment, albeit very gently, the surrounding bamboo groves and hills.

Currently, the night show entertains guests in two areas, one at either end of the island site. The entry and pagoda where guests arrive, and the main stage, perched at the bank of the Li river at the other end. Between these two points, little interaction takes place. It is here in this middle ground that two new assemblies of architecture are introduced. The first, woven bamboo lantern structures, scattered where guests circulate, whose purpose is to guide and intrigue. Then the other, a stretch of woven canopy amongst clusters of bamboo, providing an area to walk sheltered from regular rainfall. In these, the architecture relies on bamboo not only for its composition but also for its constant referral to parts that constitute the place.

When entering the site, lanterns small in stature line along the pathway cast out signals of dappled light. As visitors travel further the once small lanterns become drastically larger to a point where the guests can find themselves able to walk inside. The makeup of the lanterns remains sincere, with a structure of bamboo lengths encased in lashed bamboo either side. On closer inspection, one can get a sense of the random beauty that can only be created when something is truly constructed by hand. The slightly dark appearance of bamboo framing shows markings of how it is bowed with fire to create the curved lantern silhouette. Over this, piece by piece, teams of local craftsmen has threaded numerous stripes of bamboo in an unintentional pattern that requires no glues or nails to hold its shape. This method of production is a showcase of intricacy, clearly shaped by the hands of people and their intuition of beauty.

In the daylight, the lanterns appear solid, the yellow of the shell in compliment with the green surrounding. Come night the personality of the lantern shifts from something more unyielding to a porous shell. The lantern itself is a diffuser of light, playing theatrics of scale and light with guests. As a whole, the lantern looks at home under the arching towers of bamboo in its peripheries. Almost by chance, when looking to the distance the lantern silhouette is echoed by the stone towers of the Yangshuo, Guilin landscape strewn along the immediate horizon.

Further along the edge of the island, the canopy shrouds itself within the large masts of bamboo. At first glance it appears to rely on little for support, only the columns of bamboo shooting up and through circular openings. Hidden amongst these living clusters columns twist from their footing upward and outward mimicking the indecisive route of the bamboo to meet the structure above. Supported by the columns in a maze of tubes, the structure of the canopy while seen doesn’t look out of place.

The hand-woven layer obscures what is in front and what lays behind. Stretching 140m from where you stand the woven ceiling takes on the shape of an inverted landscape, undulating between different levels of surfaces. The stepping surface of the canopy is pieced together entirely in the same irregular hand-woven bamboo as the lantern, but on a scale that seems that it should be seated in fantasy. The resulting intention means to enchant while still extending recognition to the natural condition of the site.

Under daylight, light streams through to the woven canopy bringing patches of dappled light to the ground below. While reprieve from the sun is apparent when walking underneath, in an unexpected compliment when looking up the ceiling appears illuminated, the entire canopy giving off a temperate glow. In the transition to night, introduced light within the volume rises in intensity focusing the spattering of light in a more vivid pattern on the pathway. Fragments of bodies dip in and out the view as light streams down through the ceiling above onto guests making their way the stage.

In acknowledgment of the theatrical spirit of the Impression Sanjie Liu, moments of performance make its way into many parts of the design: The hand weaving, bamboo playing off the tension of one another. The topography of the canopy ceiling dancing between columns of bamboo as if unsupported. Even the way guests are intended to move from lantern to lantern, in a narrative of interaction. Together these subtle hints encourage a particular frame of mind, readying the guest for the main feature. 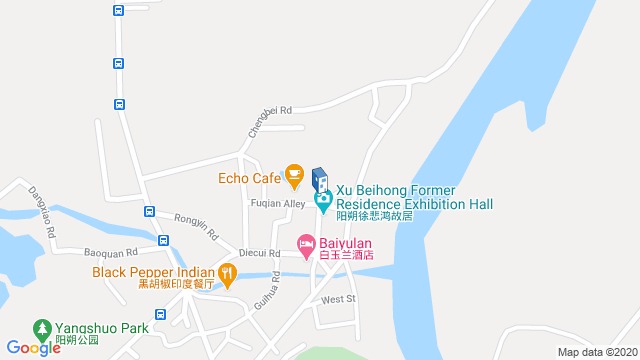 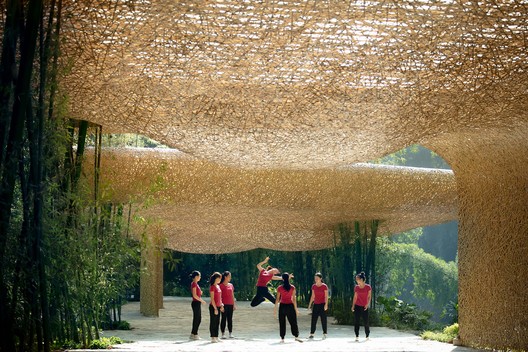