Nieto Sobejano Arquitectos have unveiled the new design for Cité du Théâtre, a large cultural center promoted by the French government in Paris. They will be working with French office Marin+Trottin Architectes, and the project will be located in the Ateliers Berthier. The winning project is based on the creation of a large elevated garden that establishes a visual continuity with Martin Luther King Park. 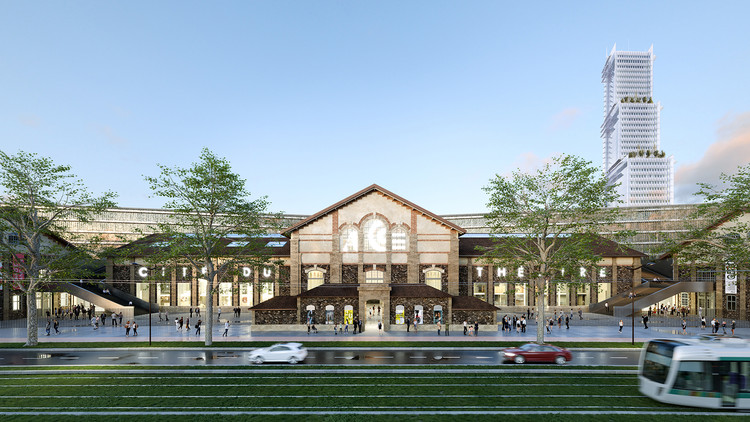 The design team created the elevated garden proposal as a "wide urban stage" that will also work with a series of restored Garnier buildings. The heart of the plan features a long building with a green facade of more than 200 meters in length, "unifying and embracing" the overall project that follows the geometry of the historical nineteenth century wall of Thiers, whose existing remains will be preserved and restored.

Call the The Cité du Théâtre, the plan will house six new modular theater halls, for the Comédie-Française, Théâtre National de I'Odéon, and the Conservatoire National. The Garnier Hall, listed as a Historical Monument, will become a large covered public space that will give access to the common areas to the three institutions: workshops, classrooms, a media library and restaurants. The project aims to celebrate the existing historical structures and provide green spaces that will transform the Cité du Théâtre into a new cultural center for Paris.

The jury for the international competition for the Cité du Théâtre was convened by the French Ministry of Culture and three theatrical institutions -the Comédie-Française, the Conservatoire National Supérieur d'Art Dramatique and the Théâtre National de I'Odéon. The project is currently shown in the exhibition “Urbainable/Stadthaltig. Positions on the European City for the 21st century” at the Academy of the Arts in Berlin.