✕
Save
A New Urban Model for a New Project of Society: An Interview with Tainá de Paula
Share
Or
Copy

Approaching the context of widening political divides and growing economic inequalities. A new spatial contract. Learning how will we live together. These thoughts brought by Hashim Sarkis, curator of the 17th International Architecture Exhibition of Venice Biennale 2021, may raise important questions about how architecture crosses and materializes social and political conflicts. To understand a more decentralized point of view, which indicates possibilities other than those dictated by normative mindsets, we interviewed Tainá de Paula, a Brazilian architect and community mobilizer in poor suburban areas.

Tainá de Paula is an urban activist. She has worked in several urban planning and social housing projects, providing technical assistance to social movements fighting for housing in Brazil. Along with her academic background, she also shares with us the knowledge gained through her personal experiences and researches, which shape a fundamental approach to understanding architecture beyond hegemony. In the scope of the questions raised by the 17th Venice Architecture Biennale, we conducted an interview with the architect in order to let her voice be heard and to shed light on new grounds for architectural thinking.

ArchDaily: It seems to me that before asking how will we live together, the first question should be: is the city created for everyone?

Tainá de Paula: No, the city is not created for everyone, and, if one can notice this in the world's greatest capitalist centers, it's even clearer when it comes to postcolonial cities, as it happens in BraziI. The quality of life in urban centers is determined by the principle of who can afford the resources and privileges, thus maintaining the social inequality that we have today. Building urban agendas throughout the 20th and 21st centuries, including major international charters and treaties, has not reflected in the destruction or reduction of urban conflicts or urban and social inequality, which leads us to acknowledge, as urban thinkers, that the problem is not in the absence of legal theory or even conceptual frameworks.

What we are lacking is a clear understanding that the current system is not capable of providing the necessary transformations towards new urban and environmental ethics in our cities.

ArchDaily: How can the city become more inclusive? What is the role of Architecture and Urbanism in this?

Tainá de Paula: Well, unfortunately, architecture and urbanism reflect their times, with their utopias and delusions [laughing]. Now, if we analyze the luxury market, with its gated condominiums secluded from the city and its architecture increasingly emptied of aesthetic sense, as well as the informal construction market, which reflects more and more the outflow of wrong building materials that are replicated to exhaustion following the logics of surplus produce - toilets that waste water, PVC piping unsuitable for Brazilian high temperatures, reinforced concrete with very low thermal efficiency for tropical cities, just to give some examples, - the chief way to understand Brazilian urban anthropology is therefore to observe urban extremities and the architecture that is being reproduced in the context of the cities.

To break this metric, it is imperative that we break these markers and establish avant-garde architectures and dialogues.

Today, Brazilian avant-garde architecture and urbanism are very centered in the academic environment, and this is harmful to both planners and decision-makers in their reflections.

Architecture offices, public administrations, and trade associations should focus, especially in the post-pandemic context, on considerations about new urban parameters that reflect on structural inequalities, that allow us to review the models established in the 20th century (modernist and formalist ways of thinking about the city, for example) and bring local and regional experiences to this construction.

A new relationship with nature reserves, climate change, considering new forms of social relations that are not based on the subordination of poor and black people, and solutions for food and energy sovereignty are the great urban challenges of the 21st century.

ArchDaily: To paraphrase Rita Lee, you sound like a person who also takes jokes seriously. How do you see the places of enjoyment offered by the city and their relevance in terms of urban conviviality?

Tainá de Paula: I use laughter as a communication tool and I understand that the city really needs to be a place for gathering and enjoyment [laughing]. Curiously, the public sphere in Brazil has always guided the relationships in all social classes. From the romantic English style Passeio Público to the beaches and public Capoeiras of Rio de Janeiro and Salvador, either because of the climate, the interest in having a public life, or the structural obstacles that place a large number of slum dwellers on the streets because of low-quality housing, Brazilians need to invest more in urban public space and return to their ancestral customs, such as a deep reflection on the reduction of backyards, the lack of consideration for urban afforestation in our poor suburban neighborhoods, and the eradication of domestic gardens for vegetable, fruit, and medicinal herbs.

What I mean is that the public space, besides being a powerful force in the debate of new social relations, art, and interactions, is also a road to reestablish a new project of society.

ArchDaily: The question posed by the Venice Biennale - How will we live together? - seems to seek an answer that focuses on a certain harmony within society and the way we inhabit the city. However, we know that the public space is inherently a place of conflict and confrontation, with a ranging occupancy and utilization rate according to race, class, and gender. Therefore, do you consider this question to be utopian or achievable?

Tainá de Paula: It is a very pertinent question, considering that the subordination of certain social groups is at stake. If we combine minorities and oppressed groups, we will have a city that reflects only a very small portion of the population, when it comes to post-colonial cities, for example. Therefore, I believe that two movements are pertinent: how the elite perceives post-pandemic plans and whether they think it is possible to maintain a model of cities that replicate inequality, and a movement of organization and counter-culture of oppressed individuals.

In a new era of history, there will be no means of maintaining dialogue between the center and the suburbs, given that the agents of the "center" have caused a collapse and systemic inequality. I insist, as an intellectual of the new urban model, that we invest deeply in the peripheral areas and the marginalized protagonists, from the perspective of territoriality as well as from the perspective of a social construct.

ArchDaily: The dispute over narratives in the city is growing more and more intense, for example, monuments that emphasize white hegemony and male-domination are being reviewed in several countries, and political minorities are becoming issues on various agendas. Apart from contributing to the creation of a more democratic society, how do these acts provide new foundations for understanding how we will live together?

Tainá de Paula: Well, I have talked a lot about this recently and I am even preparing a research project on reparations for slavery based on the sculptural ensemble of colonial cities, starting with Rio de Janeiro. It is crucial to discuss symbolic aspects and urban subjectivities in the process of restitution and social change.

The profound violence embodied in the fact that we lack sculptural elements made by blacks - the erasure of black artists is also a problem! - and the representation of black individuals in the cities shows the racism that has been replicated and pushed forward into the future societies and generations, and this is white violence unveiling in the cities.

Therefore, overturning statues takes on two roles: reconsidering what heritage means and contextualizing it, eliciting comprehension about the subjects who orbit around these historical and social values of different times, and forcing society to discuss how it would like to be remembered.

Now, as a cultural heritage specialist, I can state that cities will be remembered as the backgrounds of a society that killed George Floyd and Miguel in Recife. It is a portrait that we will not be glad to recall, but necessary for us to never repeat. 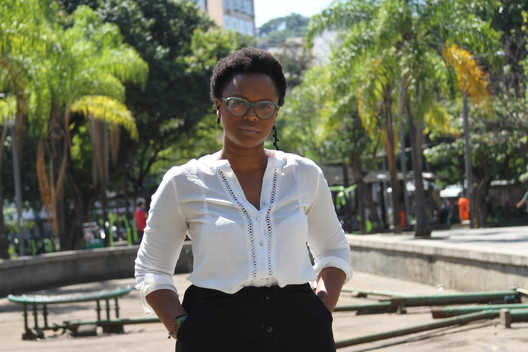