Save
The Incredible Architecture of Bees
Share
Or
Copy

Bees are perhaps the insects that most arouse our fascination and curiosity. With the exception of Antarctica, they are found on all continents, in all habitats that contain insect-pollinated flowering plants. Representations of humans collecting honey from wild bees date back to 15,000 years ago, and pots of honey have even been found in the tombs of Egyptian pharaohs like Tutankhamen. Although we generally have a fixed idea about what cartoon bees look like, there are thousands of species around the world, with different sizes, colors and behaviors. There are even several examples of solitary bees, many without stingers, and even some species that survive by plundering other weaker colonies. But something that has consistently impressed researchers is the organization of their hives, which are truly highly populated cities with an efficiency to make any urban planner envious.

Bee societies are complex, divided into hierarchical groups. Among females, there is the queen bee, much larger than the others, responsible for laying eggs. There are also the workers, who divide themselves to perform all the other functions in the hive, such as the construction of brood cells, feeding, collection of food outside the hive, defense and cleaning of the nest. The colony males are drones, in smaller numbers, whose only function is to fertilize the queen during the nuptial flight. This organization has slight differences between species. For example, the Mirim Droriana species, common in Brazil, always keeps a princess bee imprisoned (an unfertilized queen bee), ready to exercise its function in the event of the death of the queen bee.

When we approach the physical structures of the hives, the variety of construction types is also huge. While Apis Melifera stocks honey in traditional hexagonal combs, there are species that create true nesting skyscrapers. The Australian species Tetragonula carbonaria, for example, is one that lacks the well-known and feared stingers for defense. That does not mean that they do not have protection mechanisms, however. The architecture inside their hives is constructed in a way that beetles and other invading insects who try to infiltrate the nests end up lost in the maze and are killed covered by a mixture of wax, mud and vegetable resin.

This species in particular has been studied a lot due to the designs discovered in its hives. Scientists have observed a variety of structures in the honeycombs in three dimensions that can be classified into target and spiral patterns, which can reach 20 floors. What has aroused the researchers' curiosity is how the workers know what type of structure to follow. How are they aware of where to start building the next cell and what exact dimensions to follow, without a project or a masterplan?

Each small circular cell is an egg chamber, built by a worker bee that secretes wax there to form the structure. This cell is supplied with food regurgitated by a nurse bee and then filled with an egg by the queen bee. Within these cells, bees grow from egg to adulthood in about 50 days. When the construction of the cell is completed, the workers move on to the next, building outward and upward in a spiral pattern. That is, the higher the level, the smaller the radius.

In this paper published in the Journal of the Royal Society, scientists observed that the resulting morphology is similar to the pattern of crystal growth. According to the researchers, both in the crystals and in the combs of this species of bee, the growth occurs in layers. Each layer grows by the addition of individual units, and both can be described within the mathematical structure of the excitable media. Crystals, viscous fungi, the brain, the heart, chemical oscillators, forest fires and many other systems can function as excitable media; in this case, bees making their combs do too. What mathematics tells us is that the processes that drive atoms or molecules to aggregate like a crystal have the same mathematical structure as the processes that drive bees when building their combs, so that both have the same spiral patterns and target. "There is a beautiful mathematical equivalence between how molecules build a crystal and how bees build a honeycomb.”

As noted in this text published on the Live Science website, researcher Julyan H. E. Cartwright saw a viral image of the infamous brood combs a few years ago and immediately recognized the pattern; at the time, he was studying mother-of-pearl mollusks, whose iridescent shells also reveal distinctive spiral structures when viewed under an electron microscope. These are laws or orders that seem to govern the entire universe, which scientists are beginning to search for.

We have already discussed here how important these small creatures are for life on the planet, especially for the production of most of the food we consume. In fact, when we start to go deeper and deeper into nature, we see how much we still need to understand about it, both its complexity and simplicity. By knowing more about these processes, we can seek to work in a more integrated way with nature, not exploring it indiscriminately, and often arrogantly, as we have done throughout history. This can be, first of all, an exercise in humility for human beings. Understanding natural solutions can be a good way to create more sustainable architecture. 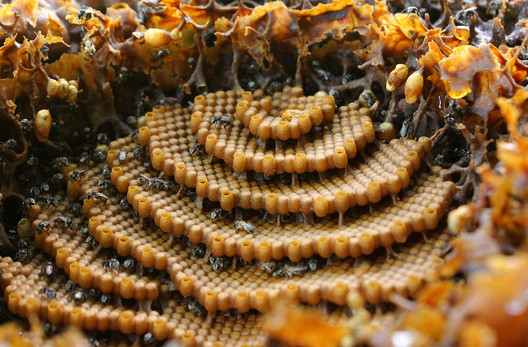