Skateboarding is its own urban experience. As interactive public spaces and tactile surfaces, skate parks have slowly begun to shape the way we think about urban design. Beyond the boundary of parks themselves, skaters look at the architecture of the built environment outside of its intended purpose, and in turn, are rethinking how we gather, move around, and reimagine the future of urban life. 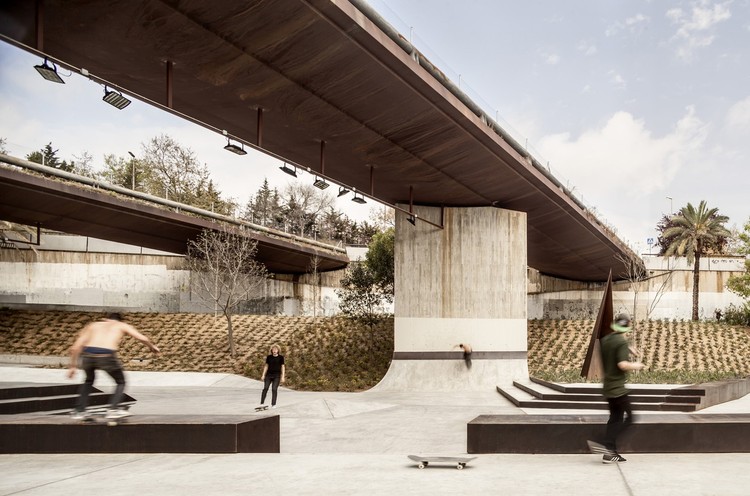 As editor Vanessa Quirk explored in her op-ed, since the 1970s, when skaters began appropriating public spaces for their own skating purposes, architects have been complicit with city officials in discouraging skateboarding, from placing uprights on benches to placing skate-stoppers on level surfaces. To design with the skateboarder in mind means "to take no intended use for granted, and at the same time realize, that your design will be used and transformed in ways you never could have imagined." Fast forward nearly a decade later, and many incredible skate parks have been built that are influencing urban design.

These ideas have been explored in-depth by Iain Borden in Skateboarding, Space and the City: Architecture and the Body, as well as Bobby Young's A Skateboarder's Guide to Architecture. As Borden notes, "Skateboarding began in the beach cities of California, as a surfer’s activity, emulating the surf moves on the hard surfaces of urban subdivisions and concrete. Skateboarding has always been about appropriating the city." The following projects showcase skate parks from around the world, each an exploration into what it means to move around the city, to bring new life to abandoned spaces, and how we can re-appropriate the architecture of modern life.

The program presents this new skatepark as a skate-square. The project works with the limits of the area, taking advantage of the gradients and the containment of the slopes in order to place all the elements for skating. These are configured as walls, inclined planes, stairs, steps, platforms, benches, handrails, etc.., all elements related with each other in a common language.

The Municipality of Stuttgart intended to build a roof for the skaterpark placed at the Friedhofstreet in the north of Stuttgart, which was constructed in 2008. The new housing enables the skater to use the park for longer hours, as well as if it snows or rains.

A new skate facility for the city of Navarcles is conceived as a plaza. The facility for skateboarding is considered as an opportunity to contribute in the urban development of the city, transforming an old sports area into a new public park. Standard public space materials are used to build it, such as pedestrian pavements or massive granite ledges and “hubbas”.

The new skate park of Nou Barris lies over the cover of Ronda de Dalt, one of the biggest road infrastructures of Barcelona. The skate park is a result of an intense work with the local users through citizen participation process, in order to achieve a skate park according to their needs.

Danish architecture and design practices CEBRA and Glifberg+Lykke have designed a multi park and cultural centre for street sports on the harbour front of Haderslev in southern Denmark. StreetDome is a vast and unique urban landscape for activity and recreation including a 4.500 square metre skate park, as well as space for parkour, boulder climbing, and more.