Architecture and research firm rat[LAB] Studio and Shilpa Architects have designed a new temple in Koppur that reinterprets India's vernacular through parametric design. Called the Shirdi Sai Baba Temple, the project is located on the outskirts of Chennai on an 11 acre site at the epicenter of a 338 acre masterplan. The design features an 11 sided polygon (hendecagon), articulated as a three-dimensional polyhedron. 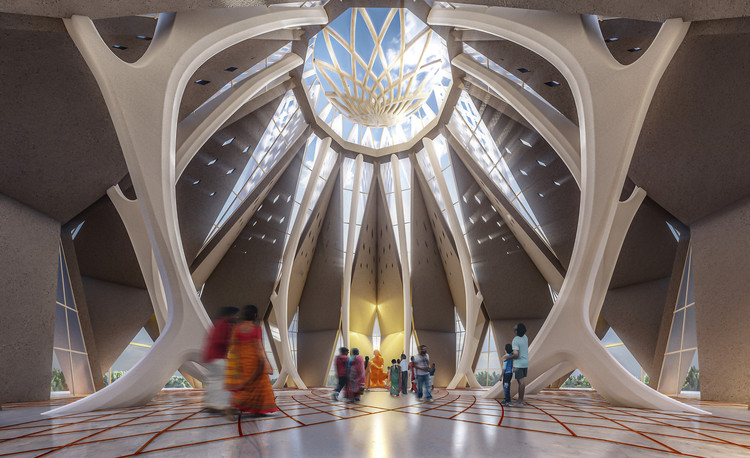 Balancing sacred geometry with engineering logic, the new temple was created through an algorithmic process using spatial and structural constraints as its parameters. Embracing the "Land of Temples", Tamil Nadu, the project addresses the client brief asking to use the number 11, owing to their beliefs in numerology and vastu - a traditional ancient Indian science. The hendecagon evolved into three-dimensional spaces while evaluating environmental aspects such as daylight, solar heat gain, and shadows.

Inside, the flooring pattern in the main hall is a mathematical looping system using 11 vertices of the hendecagon that fold to form interstitial spaces within the geometry. A recursive division of curves creates a focal point at the ground level where the pattern curves and guides the visitors for prayers and offerings. A pure white space from inside is lit by sunlight diffusing from the oculus on top. Overhead, the team explains that the double fold origami structure created a rigid structure with fluid columns that blend into the interior space while allowing a long-span shell-like structure.

The masterplan was developed by Shilpa Architects and was inspired by the Gode Neem Tree of Shirdi, Maharashtra. The Shirdi Sai Baba Temple is currently scheduled for completion in 2021-22. 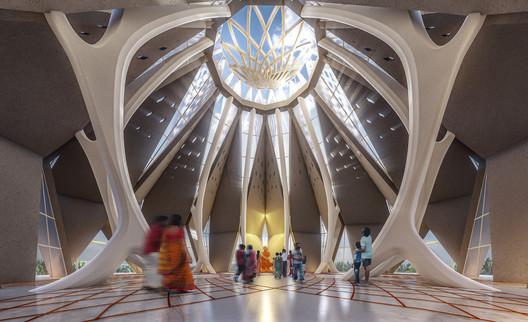