Save
No More Room for the Living or the Dead: Exploring the Future for Burials in Asia
Share
Or
Copy

In some of the most dense cities around the world, it’s becoming an increasing challenge to find a comfortable space to live- and similar for when you die, too. It’s estimated that 55 million people pass away each year, and for every one living person today, there are 15 times the number of deceased. Yet urban planners and architectural developers are more interested in dealing with the living than dabbling in the business of death. As a result, it’s created tension in the two parallel worlds- and as time goes on, more questions are being raised about how we address public space that can be designed so that both the living and the dead can coexist.

Bukit Brown Cemetery, one of the largest burial sites in Singapore, is situated on more than 200 hectares and holds the remains of more than 100,000 Singaporeans and immigrants for over a century. However, this “final resting place” may not be so “final” after all. In 2015, the Singaporean government announced that close to 4,000 bodies would be exhumed to make room for a new high way system that would soon cut the cemetery in half. But the turnover of bodies here is hardly breaking news. The Ministry of National Development later released rendered images and announced that the entire cemetery would be converted into a large scale housing development by 2030, causing families of the deceased to wonder where these bodies will be relocated, and in what time frame.

Singapore isn’t the only Asian city that faces problems with the growing number of gravesites. Hong Kong also encounters this dilemma, but arguably, has yet to find a tangible solution for what to do with the increase in interments. Planning for long term use in a city where land is always at a premium requires people to make difficult decisions when it comes to choosing between preserving dedicated cemeteries and clearing real estate to advance the city’s urban development.

Hong Kong’s issue with death is largely influenced by two factors: the cultural norms surrounding the superstitions of the afterlife and the associated costs that come with living in a hyper-dense city where there is literally no more room for both the living or the dead. The city is filled with a combination of historic cemeteries of those who died in World War I and World War II, and a series of hastily designed hillside cemeteries that follow feng shui orientations rather than aligning in traditional strict rows. While the last available public burial space was filled almost forty years ago, those who are lucky to locate a private grave can expect to pay upwards of $1.8 million HKD ($230,000 USD) for the privilege.

Alternatively, there is a six-year waiting list for those who are cremated to be housed in a small spot in a public columbarium- a similar waiting time to obtain a public housing rental flat in the city. Like many other places, Hong Kong has experimented with a few unsuccessful ways of dealing with new methods of burials. The government announced a policy that required columbarium workers to become licensed- forcing half out of their jobs and 300,000 urns to be returned to families.

In addition, there is expected to be a shortage of more than 400,000 urn spaces by the end of 2023. But none of this solves the actual problem of space. Although Hong Kong promised to build 18 additional columbarium, only two have been constructed so far after the realization that even those facilities were not enough to meet the demand of the city’s aging population. Instead, families are shying away from the tradition of burying family members nearby so their spirits can watch over them, and favoring travel to mainland China to bury their loved ones. There, more plots are available, but the businesses capitalize on the shortages, and the costs still exceed one million Hong Kong dollars.

Perhaps the answer begins with an attempt at changing the cultural attitude with what cemeteries actually represent. While many people see them as space-wasting land, some cite historical precedent that cemeteries were not always viewed as unsanitary spaces full of momento mori, but were once rural, park-like social epicenters. In cities that lacked public greenspace, cemeteries actually became popular designations for holidays and other family gatherings. Is it possible to acknowledge memorials as simply architectural exercises that are completely disconnected with spatial concerns and remove the taboo associated with giving cemeteries a multi-purpose program? Or, should we ultimately find a new solution to traditional burials that can still preserve a memory without the necessity of physical space?

As the world becomes increasingly digital and interconnected through our phones, some governments are turning to social media networks of “virtual graveyards” for families who have opted to cremate their relatives but cannot afford the luxury of a physical marker and space to visit their loved ones. Others, like Japan-based Panasonic, have purchased corporate burial plots within graveyards for some of their employees as a part of their company benefits. In Kuala Lumpur, where cremation is a cultural norm, the need for smaller sites has lead to the commercialization of columbaria where urns are stored in vaults and can be accessed via an electronic membership card. Nirvana, one of the companies at the forefront of the urn storage industry, has plans to build additional columbaria across Asia, but has been unable to keep up with the growing demand.

For now, we persist with traditional burial methods because we want to pay respect to our loved ones in death, as much as we would if they were alive. For many, this means preserving their memory with something tangible and making a pilgrimage to visit their physical mark on the earth, whether its a grave, columbaria, or another memorial of some sort. Until there's a more long term and sustainable solution, we will continue to make way for the dead, no matter the cost.

NewsArticlesSingaporeCemeteriesHong KongÁsiaJapanUrbanismCitiesADTopic 2020 How Will We Live Together
Cite: Kaley Overstreet. "No More Room for the Living or the Dead: Exploring the Future for Burials in Asia" 21 Aug 2020. ArchDaily. Accessed . <https://www.archdaily.com/945794/no-more-room-for-the-living-or-the-dead-exploring-the-future-for-burials-in-asia> ISSN 0719-8884
Save 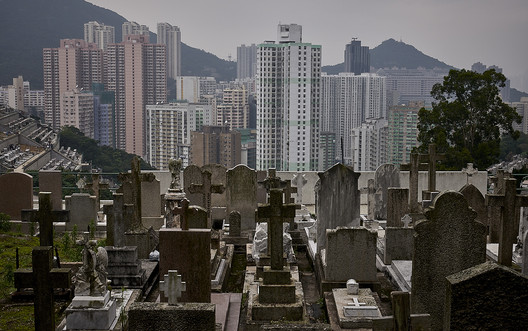